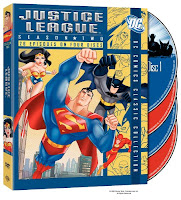 This is another episode that we watch every year, and every year I forget how good it is until I watch it again. The only one-part episode in the first two seasons of Justice League (before it became JLU), this holiday episode is just fantastic.

Batman got enough holiday cheer in his two previous holiday episodes, and Wonder Woman doesn't appear either, but everyone else has great moments. The episode consists of an intro about the last mission before the holidays, and then three inter-cut storylines.

One revolves around Green Lantern and Hawkgirl. It continues the thread of their growing attraction; GL shows Shayera how much fun it is to play in the snow, and she shows him how they celebrate on Thanagar. Can I add here how much I adore this Hawkgirl?

One follows the Flash as he attempts to find a popular toy for the kids at a Central City Orphanage, when his plans are derailed by a run-in with Ultra-Humanite. Humanite gets a lot of the best lines in Justice League, and this episode has some great bits with him.

The last storyline follows J'onn. As a Martian, he doesn't celebrate our holidays, but Superman convinces him to come to Kansas for Christmas. Ma and Pa Kent welcome him in, and he struggles to understand the holiday.

The whole thing is so sweet. Everyone gets a great moment, the episode is just stuffed with nice touches. It makes me very happy, especially the little nods to the larger DCU:

I have to admit that I giggle with fangirl glee at that one.