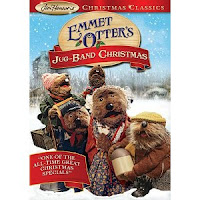 Just about everyone my age has some memory of watching this when they were young, although most of us can't seem to remember the details all that well.  Lindsay and I came across this in a drug store about a year ago and snatched it up.

This viewing actually helped me put this in perspective.  By the time we got around to it, we'd already seen around seventy or eighty Christmas specials.  You'd think the burnout would work against this one, but, if anything, the contrast underlined just how good this special is.

Before I get involved with that, let me take a moment to explain why such context might be needed.  The thing about Emmet Otter's Jug-Band Christmas

(and, just to be clear, it is a THING, not an ISSUE), is that it's slow.  Last year, when I saw this for the first time in two decades, I found it a little too slow for my tastes.  If it makes sense, I wouldn't call the special "boring," but I'd be lying if I said I wasn't bored.

There's a fine distinction between slow and boring, but that's where context helps.  I've seen a lot of genuinely boring Christmas specials in the past four weeks, and Emmet Otter doesn't sink to their level.  Not a second of Emmet Otter's Jug-Band Christmas is wasted or superfluous.  The special spends its time carefully, building tone, setting, and characters with methodical care.  Yeah, it moves slowly, but it does so because the world it inhabits moves slowly.  The characters' lives move slowly.

A bit of context helped the songs stand out as well: I honestly can't think of anything I've seen this year with original music that can compete.

The care that went into this permeates the piece.  In addition to the songs and puppets, the set and model work is incredible, and the use of light and color is simply breathtaking.  Some of the birds they built for this look and move like the real things.  In some ways, this represents the most fully realized fantasy world the Creature Shop ever constructed, possibly eclipsing even The Dark Crystal.

I'm also impressed with the intricacy of the plot, which I'm assuming was taken from the source material.  In addition the brilliant play on Gift of the Magi, the story's use of the Riverbottom boys is deceptively complex.  While ostensibly antagonists, they're essential to the story having a happy ending.  Try to imagine the special's conclusion with either Emmet or his mother winning: the other would have been miserable.

It doesn't hurt that Henson ensured that the Riverbottom Nightmare Band deserved that prize.  If I'd been judging that competition, I'd have voted for them, too, even knowing about their behavior the prior day.  I mean, come on: that song was AWESOME.

If it's been a while, this is definitely something worth revisiting.