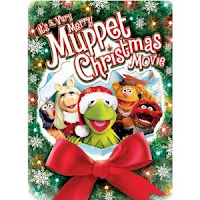 If you're not already a fan of the Muppets, "It's a Very Merry Muppet Christmas" is a bad place to start.  In fact, if you're only a casual fan, this probably isn't for you, either.  It's an uneven movie: there's a solid chunk that just throws dated pop-culture references at you, including a particularly painful parody of the Crocodile Hunter I'm betting the producers are now wishing they'd skipped.

But, for all of that, if you are a die-hard Muppet fan, this made-for-television movie is something you need to track down.  It's imperfect, but what it does well it does REALLY well.  Structured like "It's a Wonderful Life," the movie explores a world without Kermit.  For the minor characters, this is accomplished in a fairly unremarkable scene using the movie's villainess (more on her in a moment).  But for the really major characters - Fozzie, Gonzo, and Miss Piggy - another approach is taken.

The events of the 1979 Muppet Movie are never directly addressed.  No one talks about how they met or their first adventure together.  But, with utmost care and attention to detail, the movie creates an alternate universe where Kermit never traveled across the country and pulled these characters into his dreams.  It rewinds the characters' lives, removes that moment, then leaps to the future.  And, in each case, the depiction feels completely right.

How much care and thought was put into this?  I'll put it like this: there's a scene in the alternate world where Kermit stares in horror and disbelief at a Doc Hopper's restaurant, which is now a national franchise.

In addition, there are some surprisingly good non-Muppet characters and moments.  The frame story involves an angel going to God to plead Kermit's case.  The depictions of Heaven and God - played by Whoppi Goldberg - are absolutely brilliant.

The movie's villain is played by Joan Cusack, who's always great.  She's almost a Muppet, herself, and she strikes an incredible balance here.  The role is basically an over-the-top caricature of a cartoon villain obsessed with money, but Cusack plays it with such humor you almost sympathize.  She's an brilliant banker who's sick of self-righteous idealists prattling on about dreams.  It's not hard to see her point, particularly when she's able to get the upper hand in almost every interaction.

Again, if you're not a fan of the Muppets yet, this one isn't going to change that.  This movie's strength comes from its relationship with the Muppet Movie: if you haven't seen that, you shouldn't see this.  But, if you are a fan who's seen The Muppet Movie a half dozen times, you're going to be impressed with this one.  I know I was.
00's Comedy Erin Snyder Fantasy Movie Puppet