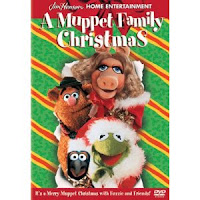 I find it baffling that this isn't better known.  Everyone seems to remember The Christmas Toy, Emmet Otter's Jug Band Christmas, and John Denver and the Muppets: A Christmas Together, but most seem to have blocked this one out.

It's a shame, too, because this is phenomenal.  Incorporating characters from at least three Muppet productions (debatably more - the Muppet Babies get a nod at one point), this thing is made for longtime fans.  It's just buried in decades of references and continuity.

It's a massive crossover event, sort of a Secret Wars for the Muppet-verse.  Seeing the Sesame Street characters engage in small talk with Doc from Fraggle Rock is awesome, as is seeing Rowlf have a discussion with Sprocket.  When characters come together to sing a medley, the amount of thought that went into determining who gets what verse is kind of astonishing.

My favorite scene comes when the Swedish Chef gets a look at Big Bird and realizes there's a potential for the largest roast in history.  He invites Big Bird into the kitchen, and what ensues is nothing short of brilliant.  Think back to the first time you read The Dark Knight Returns and saw Batman face off against Superman.  You remember how the fight was nothing like you'd have expected, but after you'd never be able to imagine it differently?  That's what this is like.

The special closes with Jim Henson himself making a rare cameo.  He sticks his head out of the kitchen to observe his creations celebrating before turning his attention to the dishes.  I'm not sure whether it was intentional, but it definitely feels like he's standing in for God.  It's a touching moment, especially considering the man himself passed a few years later.

I've often reflected on the injustice of L. Ron Hubbard having his own religion while Henson doesn't.

A version of this is on DVD, but don't buy it: it's missing some important scenes.  Your best option is to track this down online.  It might take some work, but it's definitely worth it.
80's Comedy Erin Snyder Fantasy Highly Recommended Puppet Special Variety