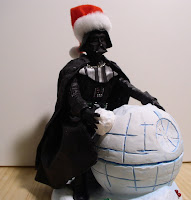 Is this really as bad as you've heard?  Yeah.  It might be worse.

If you haven't had the pleasure, this is a variety show featuring a surprising number of cast members from the movie.  Most of the established characters get a scene or two, although Chewbacca has a larger role.  It's his family celebrating "Life Day," after all, and he's trying to get past an imperial blockade to get home in time.

Of course the real stars are Chewbacca's family, who are given extended scenes in which they go about their lives, talking and arguing without translation.  When they bother to call humans, we find out - again and again - that they're worried Chewie won't make it back.

Around this riveting frame story, we get a number of short "comedic" bits, as well as some "musical" numbers (yes, those quotation marks are called for).  A few of the musical acts aren't awful - Jefferson Starship's number is fine.  The there's the Diahann Carroll scene.  Her song is nothing special, but the scene around it is incredibly bizarre and surreal.  It's more than a little disturbing, in fact: it's presented - and seemingly enjoyed by Chewbacca's father - as pornography.

I'm not making this up.

Most everyone agrees the best scene is a short animated bit, which actually introduces Boba Fett years before The Empire Strikes Back.  It's fair to say this is better than the rest of the movie, but it's still kind of boring and uninspired.  His plan is needlessly complicated, and it falls apart for the dumbest reason imaginable.

What's really astonishing about this is the run time.  At two hours, this just won't end.  Most of the actors who were in it refuse to discuss it these days.  There's a reason for that.

I've seen it twice now, and it doesn't get any easier.  No one watches this because they like it or think it's good.  Rather, this has sort of become a nerd right-of-passage.  You watch this because it exists; because there's no real reason to sit through it.  By now, you already know whether you fit in that camp.

You can't get this on DVD.  Actually, it was never released on VHS, either.  And it only aired once.  The only copies in existence were taped off the television in '78.  Fortunately - or perhaps unfortunately - it's available on YouTube.  Start here, if you dare.
70's Crime Against Humanity Erin Snyder Fantasy Science Fiction Special Variety