The New Woody Woodpecker Show: A Very Woody Christmas / It's a Chilly Christmas After All / Yule Get Yours (2000) 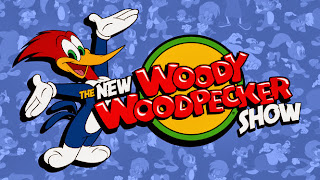 In the first segment, a couple villains are stealing presents with a fake gift-wrapping scheme. Woody gets involved when he gets tricked by them, and he then tricks the dumb henchman into helping him take back the gifts by pretending to be Santa. The writing is obvious, and the show seems to be uncomfortable with its characters, not sure whether Woody is a loveable prankster or a semi-sadistic trickster, instead trying to have it both ways.

The second segment is maybe a little better, just because there’s less voice acting, and the animation’s not awful. Chilly Willy (the mute penguin character) is trying to catch a ride on Santa’s sleigh to the Bahamas for the winter. There’s a pretty cute moment at the start when Willy gets to the North pole via a giant tunnel from the South pole. The rest of it is Willy foiling the efforts of a well-meaning but hapless dog-elf-guy to keep him off the sleigh. It’s exactly the sort of humor I generally hate, and sure enough, it doesn’t work for me here.

The third segment is at least okay, primarily due to the presence of Rob Paulsen as the head elf. Woody is worried about getting coal for Christmas (again), so he tries to film a bunch of fake good deeds to shift the scales. Everything goes poorly and then more poorly for him. Because Santa’s a big softy, though, he takes pity on Woody by the end.

Overall, the episode has moments of fun, and moments that are funny, but most of it just drags.
00's Comedy Episode Fantasy Lindsay