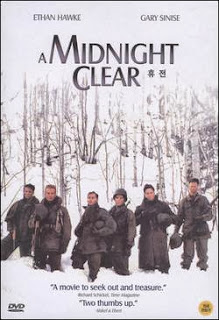 This was highly ranked on a list over at Rotten Tomatoes, so I decided to check it out. It's a Christmas war movie, which seems to be a fairly sparse sub-genre, especially when compared to the almost absurdly large Christmas action movie genre. It's a stark and fascinating film, at times sad, beautiful, and funny. It's got some issues which hold it back from being a bona fide classic, but it's still worth watching.

The movie follows a unit of "whiz kid" soldiers in World War II who are sent to gather intelligence. When the movie opens, half of their unit is already dead and most of the rest are sick of combat. Every synopsis I've seen focuses on the movie's second act, when they have a series of bizarre encounters with a German squad culminating in a Christmas celebration. There's some good film making on display here. These scenes are tense, funny, and engaging.

Gradually, we learn the Germans want to surrender, but there are some complications. The sequence resolving this section plays out the only way it can... and if you think that's happily, you haven't seen many war movies. The scene is painful to watch, in both a good and bad way. The "good way" is due to its emotional punch: the movie handles death extremely well. The "bad way" has to do with the setup. To be blunt, the sequence is contrived and unbelievable: the German's plan is unnecessarily complicated. More accurately, it's necessary to forward the movie's plot and themes, but not the characters' goals. This leaves one of the movie's most important scenes feeling like a bit of a cheat. Kind of like a character opening the basement door in a horror movie: we know what's coming and wonder why they can't figure it out.

I was kind of surprised when the movie didn't end there. Instead, it moves into more familiar territory for its genre, though - in its defense - it never devolved into action flick territory. Still, the entire last third of the movie could have been excised without detracting from the experience.

The movie is largely about death and rebirth, and the Christmas elements are professionally interwoven into these themes. The darker elements of the holiday permeate the film in a way you don't often see attempted. It's a great holiday film if you're looking for something dark and intelligent.

The cast, which includes Gary Sinise and Ethan Hawke, is impressive, and - with the exception of issues I've already harped on - the writing is fantastic. It was made on a relatively modest budget (wikipedia says five million), but it didn't need anything more.

I'm marking this "highly recommended", mostly because I'm impressed with its use of the holiday. It's a good movie beyond that fact, but the unconventional spin on Christmas is what pushes it over the line.
90's Drama Erin Snyder Highly Recommended Movie War