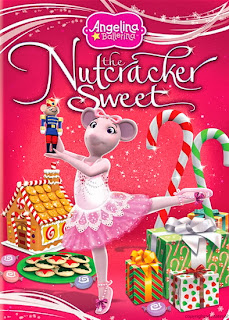 I’ve seen a few episodes and half-episodes of this show before, and it’s usually at least inoffensive and fluffy. It’s okay CG with cute stories about friendship and such, starring a bunch of young mice who go to a special performing arts school. This special is made up of five short half-episodes, only two of which were Christmas themed, so those are the two I’ll address here.

“Angelina and the Front Row Ticket” In this piece, Angelina has to try to decide which of her friends to invite along to a special performance of the Nutcracker. Frankly, this felt really padded. There were musical interludes that really contributed nothing and not enough plot for 12 minutes. The resolution was pointless and obvious. Plus, it was laughable how much better this same plot was on My Little Pony.

“Angelina’s Holiday Treats” This was a better short. Angelina and Marco eat too much junk food on the day of the holiday showcase and risk ruining their performance. And you know what? Nothing magically saves them from the consequences of their actions. The amount of candy they eat is somewhat unbelievable in context, but it’s a cute story that hits its moral without hitting you over the head with it.

So far as holiday elements go, though, both these pieces are pretty thin. I don’t know whether their town is suddenly supposed to be someplace tropical or they were just too cheap for new background graphics, because there’s no snow or coats or anything winter-like outside, just decorations and such indoors.

This was just okay. I’d say it’s pretty good for its target audience of 3-8 year olds who like art, but not so much for anyone else.

Side Note: actual episodes of the show have live-action segments that profile real musicians/dancers/etc, and the group Black Violin, who I had the pleasure of working with a few years back, filmed a fun one: