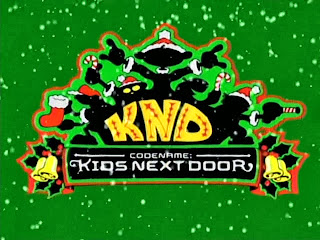 If you glanced away from Cartoon Network in the mid-00’s, you might have missed Code Name: Kids Next Door. A show about a group of kids who fight as a spy team against corrupt, bumbling and evil adults, it's exactly the sort of premise I loved as a kid. However, given that it premiered when I was was in my 20’s, I always found the premise more fun than the execution.

The holiday episode has been on our to-watch list for a while now, and I finally found it on a Cartoon Network holiday compliation DVD.

The premise is simple enough on the surface: The KND's arch-enemies (the Delightful Children from Down the Lane) are sick of being on the naughty list, and they're willing to destroy Christmas to get presents for themselves. Where it gets downright odd is that the whole thing is a Marvel comics parody. Tons of minor characters are thrown in as references, Santa's sleigh has a Cerebro-esque interface, and the narration that keeps breaking in (panning out to a page of comic panels) to recap and introduce these elements has a strong Stan Lee vibe.

I giggled a lot at Wintergreen, leader of Elf-a Strike, but the references felt more like padding than plot most of the time. I'm not really sure who these jokes were aimed at.

There's also a secondary plot about Number Three being frustrated (and insane) about the fact that none of her friends bought her presents. It fits with the internal logic of this episode, but isn't terribly compelling.

In the end, it's cute and sometimes funny, but I think there were better episodes of this show. If you are looking for a Marvel-Christmas-spy-kids mash-up though, look no further.
00's Comedy Episode Lindsay Spy Superhero