Aqua Teen Hunger Force: Cybernetic Ghost of Christmas Past from the Future (2002) 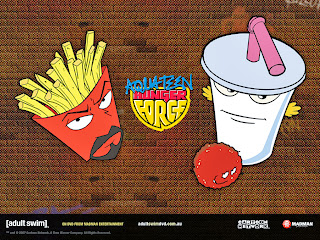 Well, the good news is that this is the best best episode of Aqua Teen Hunger Force I've ever seen. The bad news is that doesn't mean much.

The premise of the show - if you've never seen an episode - revolves around anthropomorphic fast food items living in New Jersey. I've seen several episodes and have never really figured out what they're going for, if anything. Maybe there's a statement about fast food icons like Ronald McDonald. Or maybe the showrunners just got high and put this together. Regardless, the comedy generally comes off as weird for the sake of weird. This episode is no different, but it is kind of Christmas themed. So here we are.

The plot centers around a robot alien showing up at the home of Carl (the next door neighbor of the main characters). The robot claims to be the ghost of Christmas and fills Carl's pool with blood. The majority of the episode is devoted to the robot providing a nonsensical explanation as to why he's done so. Most of it focuses on an ape Santa Claus and an army of Neptunian elves. The flashbacks were told using still illustrations, some of which were fairly amusing.

I wouldn't advise tracking this down, but it was better than I was dreading. I should probably also mention that Aqua Teen Hunger Force has a Christmas album. I haven't heard the entire thing, but I have listened to a handful of tracks. Most of them are mediocre, but the song, "Twas the Night Before Jesus" is actually kind of hilarious. That might be worth tracking down on Youtube; this episode: not so much.
00's Comedy Episode Erin Snyder Science Fiction