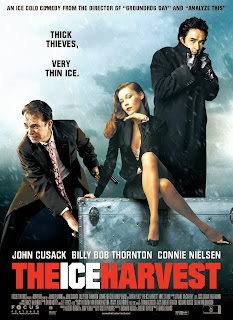 For a sub-genre that's not widely discussed, there is a hell of a lot of Christmas noir out there. The Ice Harvest is a long way from the best of the bunch, but it's an interesting flick.

The whole thing is set on Christmas Eve, right after Cusack's character (along with his partner, played by Billy Bob Thornton) steals two million dollars from his boss, a mobster who owns several strip clubs. He's played by Randy Quaid, who - along with Thornton - are fairly iconic Christmas movie actors at this point.

The movie does several things right and a few wrong. I liked the visuals - the world depicted here is a pale blue; you almost get cold just watching the movie. The actors do a decent job, and I found the story interesting.

On the other side of the coin, there were some major tonal shifts, particularly around a minor character played by Oliver Platt. Most of the movie walks a line between being a dark comedy and a crime story, but when he's on screen, it turns into a slapstick. He's got an important thematic purpose, but I can't help but think it could have been achieved with more subtlety.

And then there's the end. Not the resolution to the plot - I liked that quite a bit - but the epilogue, which provides a moment of hope and optimism, which is completely inappropriate for everything that came before.

Nevertheless, the movie is a decent enough downer, a bleak answer to an overabundance of holiday cheer. It's by no means alone on that count, but I'm always up for another depressing movie at Christmas.
00's Crime Drama Erin Snyder Movie