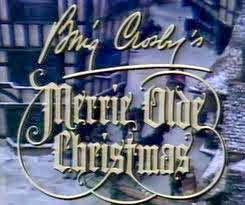 It takes some inspiration from that first 1961 special: Crosby and family are invited to England by a distant relative for the holidays, and it’s mostly an excuse to have a group of British stars pop in and out. One of them plays 3 or 4 different characters, half of them in drag. That’s… slightly odd. I’m guessing there’s a reference that we’re missing.

This special is filmed on an actual set, which is a nice change, although it feels sort of like it should have a laugh track. The fact that it doesn’t actually adds an odd poignancy, because it’s unclear whether some things are intended to be funny. Crosby seems markedly older, but also more invested in his songs and scene partners.

Early on you get the scene that you’re watching the special for, if you’re watching this special. This is the source of the famous duet with David Bowie. The two men rib each other gently about their music, and then just simply sing. It’s actually quite lovely.

Unfortunately, the tone is broken immediately by a ridiculous extended sequence about meeting the ghost of Charles Dickens, and then Twiggy and actor Ron Moody sing a song taken from The Roar of the Greasepaint, The Smell of the Crowd, only adapted to be about Dickens characters. It’s indescribably weird. The background music does hints of “Consider Yourself”, but the number from Oliver! is never actually sung.

Twiggy and Crosby follow this up with a sweet rendition of “Have Yourself a Merry Little Christmas”, only to have the tone destroyed again, this time by the awkward insertion of a David Bowie music video. I have no idea why this is there. This music video is my new hypothesis for where The Star Wars Holiday Special got some of its no-good-very-bad ideas about "pace" and "structure" and "tone".

Oh, I forgot that there’s this entire plot with all the Crosby kids trying to figure out whether they’re actually related to this Sir Percy Crosby whose house they’re staying in. It’s okay. Sir Percy finally arrives, and I get the biggest shock of the day: It’s 1977, so, yup, they do a popular song of the time. What song? “Side by Side”, from Company, by Stephen Sondheim. It’s a fine rendition, I was just so startled to see it here.

We continue the pattern of alternating kinda almost good segments with terrible/mediocre ones by launching into a “humorous” sequence starting Bob Hope as the ghost of a jester. Finally we get to the big number, everyone sings, including some more professional kids trucked in for the last sequence. The carol medley is fine, and they manage to hit every song about bells I know and a few I wouldn’t have thought of. It is plagued by unmotivated choreography, though. Every so often, as they sing, everyone moves to a new place for no reason.

The special closes, of course, with “White Christmas”. Even if the producers/directors/family didn’t know how soon he would pass away, they had to at least suspect that this would be his last filmed Christmas special, and the presentation reflects that.

Do I recommend you sit through this one? Well, from the description you probably know by now whether it seems like your cup of tea. I think I’m glad I saw it, it was interesting, but the content is uneven enough that I’m not sure I can say it was good.
70's Comedy Lindsay Musical Special Variety