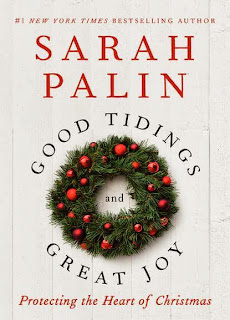 Sarah Palin's new book is, more or less, a long-winded, nonsensical rant from someone who has absolutely no idea what she's talking about.

I'll pause to let the shock sink in.

The book is largely driven by a pervasive misunderstanding of the war on Christmas, who's fighting it, and what it's over.

In her worldview, those fighting Christmas are offended atheists who want to push Christ out of Christmas and replace it with a Solstice festival, ceremonies venerating sun gods, and even Islamic holidays. She doesn't mention push from Jewish households - both liberal and conservative - who are bothered by the holiday's status in schools, nor does she acknowledge the sizable numbers of conservative Christians who boycott the holiday because of its pagan roots.

She seems to have at least a passing familiarity with those roots. There's a brief mention that Jesus probably wasn't born on 12/25, and that the holiday's date was likely co-opted from Saturnalia, but she underplays the importance of this. As she puts it, "But over time those old pagan celebrations faded into obscurity because they weren't grounded in much of anything but myth, while Christmas gained ever more prominence and meaning."

Interesting. But wrong. To the extent the Roman Solstice celebrations died out, they did so because the religions they were founded on where systematically eradicated by Christians. To be fair, the pagans had tried to do the same to the Christians first.

But, in a real sense, those celebrations didn't really die: they evolved and changed their name to "Christmas." Many of the trappings survived, including elements of the decorations and even the central narrative of a god being born on the Solstice. They simply traded out the old gods for the new one, warping the nativity into a myth that fit the holiday.

So Sarah Palin doesn't understand Christmas. She doesn't understand her opponents, either. She devotes a chapter to speculating on where the War on Christmas is going. This is presented as a riff on the "Ghost of Christmas Future" trope, and features two possible futures. She describes two imaginary trips to the University of Alaska - Anchorage, one where  "the Militant Atheists and Secular Liberals Have Their Way", and one showcasing "true religious freedom."

Needless to say, these don't shed any real insight into the future of this country. They do, however, provide us with a stark and disturbing look into the head of Sarah Palin.

The darkest time-line demonstrates just how little Palin actually knows about her enemy. In her example, the college has effectively outlawed Christianity and embraced pagan festivals, as well as other religious festivals. In the best-of-all-possible worlds, atheists and theists are sharing the same campus, placing their displays beside each other, and debating the merits of Christianity.

It's odd she'd describe the first as an atheist victory. By and large, atheists oppose other religions to the same degree they oppose Christianity. Replacing Christmas with pagan ceremonies wouldn't appeal to them. Nor, for most, would forcing religion out of view. It would be disingenuous of me to claim there weren't any atheists out there who'd like to see all religion pushed out of the public eye, but that's a pretty extreme position (akin to the small percent of extreme Christians who want to outlaw non-Christian religions). Most atheists just want it divorced from government.

Sarah Palin doesn't just build a straw-man argument here. She names her straw-man "Joe McScrooge" and uses him throughout the book.

Regardless, Palin can rest assured that a future where festivals glorifying sun gods are supported by colleges while Christian groups are outlawed isn't remotely plausible.

In addition, the left isn't entirely made up of atheists. A lot of liberals are Christian, and they want to celebrate Christmas as much as the right. They just tend to be more understanding of those who don't.

Bizarrely enough, Palin's "best case scenario" more or less describes what's occurring at colleges all over the country now as a result of liberal pressure to include other groups. Atheist organizations are now able to display their message beside Christians, as well as other religions. Free debate is welcome: that's what secularists are after.

Can you cherry pick examples from around the country that sound extreme? Sure, though I noticed that a large number of the ones Palin uses originate at private colleges, which have the right to set their own rules about groups, just as private religious colleges do.

All of Palin's talk about the War on Christmas is laid out as evidence for a larger assault on religion, freedom, and democracy. Palin writes, "Again and again, secular leftists complain that religion - especially Christianity - is a source of violence and repression, but in this country our Judeo-Christian heritage is the source of the very freedoms they so angrily use to denounce Christ and rid his very mention from the public square."

A good reminder that Sarah Palin doesn't understand history. Of course, the primary source of the freedoms laid out by American's founders was Greek philosophy, not Christian theology, which actually served as the justification for systems of European monarchy the colonists were rebelling against.

Regardless, liberals aren't trying to rid anyone from the public square. However, we do want the government's involvement to be neutral in matters of religion, and we want to ensure that public schools aren't pushing any kind of religious indoctrination. That doesn't mean we want them to teach that Christianity is bad - in fact, that's just as bad.

To put it simply, we don't think government - and that includes local - should be able to dedicate land or money to display a nativity scene, unless other groups - religious and otherwise - have an equal right to the same resources. Because there's at least one quote in Palin's book I do agree with: "A democracy without respect for individual liberty is just a tyranny of the majority."

There's a lot more I could go into: her mangled attempts to combat the phrase "Happy Holidays" as an attack on Christmas, her tedious accounts of her family's boring holiday traditions, the completely out-of-place snipes at Obamacare, the utterly random recipes wedged in the back... but I think I've gone on long enough. This thing is badly written, badly argued, and badly researched. It displays a profoundly idiotic point-of-view that's lacking even a basic understanding of history and culture. It wasn't even good for a laugh. The best aspect is it's length: I can't find an official word count, but I'd estimate around 55,000 words. I can't imagine trying to get through a 100k version of this tripe.

Oh, and in case anyone's wondering, I got this out of the library. No way in hell I'd risk a penny in royalties getting to Palin.
2013 Book Erin Snyder Sucks