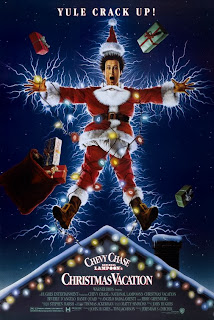 I'm pretty sure it's been at least twenty years since I last watched this thing. I actually had positive associations with it going in, though everyone around me set less optimistic expectations when I said I'd be watching it. I'm glad they did: this was pretty bad.

It wasn't terrible, exactly, at least not when compared to its peers, but sitting through it wasn't a pleasant experience. The movie is the third in the series, which focuses on the Griswold's vacations. Christmas Vacation actually has a direct-to-video spin-off of its own starring Randy Quaid. I'll... uh... I'll go add that to my Netflix queue.

Anyway, like I was saying, this one wasn't especially awful, as far as uncomfortable Christmas comedies go, but it didn't exactly transcend the genre, either. The movie centers around Chevy Chase, who's obsessed with giving his family the best possible old-fashioned Christmas ever for absolutely no reason. The movie rests on the shoulders of his character, which makes it problematic that there isn't really a character there. His motivation, mental state, and demeanor change from scene-to-scene, as does the movie's adherence to logic.

The movie trudges on: there are a handful of developments, but very little actual plot. Each sequence is built in an attempt to ratchet up the tension for the inevitable (and painfully obvious) comedic reveal. If they put subtitles on the screen warning you of upcoming punchlines and twists, they wouldn't have been any more obvious. There are a handful of jokes that deliver a little amusement, but 99% of the movie just drags on.

I don't recommend anyone sit through this. There are far better ways to spend your time.