Bing Crosby and the Sounds of Christmas (1971) 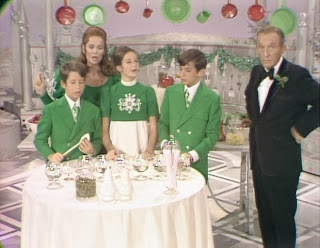 The third Bing Crosby special we watched, and it’s a doozy. At least I guess this one had a coherent theme.

This time around, Crosby is joined by his second wife and kids. I’m glad the trend of show business families performing together has gone mostly out of style. It just feels so forced. Just cast some dang kids! Also appearing are Mary Costa and Robert Goulet.

Everyone’s on deck for a boring opening number, in some of the ugliest costumes yet. The lighting design and set work are pretty decent though. There’s an interesting tension here between the idea of “live” television and scripted. Obviously this is all pre-recorded and a lot of it is lip-synced, but certain cuts and set moves are purposely intended to mask the fact that you’re not watching live.

Robert Goulet sings a boring, but booming, “Do You Hear…”, and then he and Crosby do an extremely odd extended song/sequence based loosely on an O’Henry story. No, not Gift of the Magi, another Christmas O’Henry story. It’s really surreal: Crosby plays an oddly colorful hobo.

Mary Costa (best known as Princess Aurora) does a perfectly fine “Carol of the Bells”, in a lovely sparkly dress that matches a lovely sparkly set. Crosby and Costa do a pretty actually good Jingle Bells duet. I absolutely love that she can switch from high opera to country twang at the drop of a hat. Rock on, Mary.

Unfortunately, then we have to be treated to the mediocre skills of the Crosby kids again. The daughter either does or imagines (I’m not sure whether it’s her) a Nutcracker ballet sequence that’s just…sad. And there’s a terrifying use of greenscreening and puppets and… here, click at your own risk:

That’s followed by an actually kinda cute Santa number complete with terrible Christmas puns. It’s the kind of corny number they might have done on the Muppet Show, and in that spirit, it’s fun.

An actual professional choir shows up, only for Crosby to talk over the middle of their song. (Also, the camera angle makes it look like one of them is sitting in the fire.) There’s another extended medley of carols, and then a slightly awkward joke about the fact that Crosby won’t let anyone sing “White Christmas” with him, but of course he does in the end.

Know what you’re getting into if you watch this one, but I think it’s weird and unique enough to be worth seeking out if you like older Christmas music or vaudeville-inspired work.
70's Comedy Lindsay Musical Special Variety