The Frank Sinatra Show: Happy Holidays with Bing and Frank (1957) 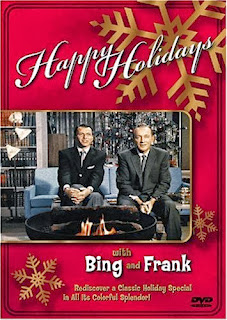 This episode of "The Frank Sinatra Show" was included as an extra on a DVD set of Bing Crosby Christmas specials. I went to Wikipedia to determine what "The Frank Sinatra Show" was, and learned there's no clear answer to that question. It sounds like it was basically a thirty minute segment where ABC gave Sinatra free reign to do whatever the hell he wanted to. Apparently, what he wanted to do this week was hang out with Bing Crosby and sing Christmas songs.

There's some quipping between songs, but no real story. They exchange gifts - each gives the other a Christmas album they recorded - and then go caroling in a grey sound stage that's supposed to be an English street... I think. That section was pretty odd.

The outside set was blatantly fake: elements were less developed than you'd want to put in a live stage performance. I suspect it would have been less conspicuous in black and white - this episode was filmed in color, though I can't imagine many viewers saw it that way at the time.

There was an even stranger sequence where Sinatra shows Crosby the food he's had prepared for their get-together. The way they talk about it - and each other - definitely implies this is a date.

I'm not really a big fan of either of these two, but that didn't stop me from enjoying this as an artifact of a different time. Intellectually, I knew there was an era where the "classic" Christmas carols were contemporary hits, but being plunged into that time is quite an experience, especially when the stars are as significant as Crosby and Sinatra.

They closed with the song I've seen wrap up every Christmas special I've seen Bing Crosby involved with: White Christmas. I wouldn't say Sinatra added much musically to the piece, but it was cool watching a recording of the two of them sing.

It's not so much that this is good, as fascinating. These are two extremely iconic figures, and I enjoyed seeing them together. I wouldn't recommend tracking this down unless you have some interest in the singers to begin with, but it's certainly interesting to watch.
50's Comedy Episode Erin Snyder Musical Variety