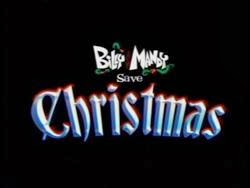 The Grim Adventures of Billy & Mandy was a bizarre show. Not quite as bizarre as Courage the Cowardly Dog, but it seemed to be trying. It ran from 2001 to 2007 on Cartoon Network, which makes it a contemporary of some the network's best programming: Powerpuff Girls, Samurai Jack, and so on.

I don't think Billy & Mandy reached those heights. The premise was kind of awesome, though: two kids essentially enslave death and force him to do their bidding. Billy is an idiot (though he usually has almost superhumanly good luck), and Mandy is a cruel, sadistic, and calculating child who routinely frightens Death himself.

No one watched this show for Billy.

It's been a while, but I seem to recall Mandy's power-level starting a lot higher than it was in this episode. If I'm remembering correctly, the original gag was that the monsters and demons they encountered were never as frightening or dangerous as Mandy. In this one... that wasn't really the case.

The special opens with the kids going to see a mall Santa, who Billy accidentally unmasks as a fake, leading to the best sequence in the special. We learn that Mandy doesn't believe in Santa, who Grim of course knows personally. They go to visit, and quickly discover that Santa exists but has been turned into a vampire.

Mandy and Death head out to confront the head vampire, while Billy sticks around to give Mrs. Claus a hand. It turns out the head vampire is actually a pretty nice guy who isn't responsible for Santa's transformation. They want the HEAD head vampire.

And, in a twist that feels a little too similar to a classic Simpsons Halloween episode, that's Mrs. Claus.

The resolution is pretty solid, though the last half really drags. I don't think this was a full hour long, but it was definitely longer than a normal episode. I'm pretty sure they could have pared this back to 22 minutes without losing anything important.

It's a solid special but nothing outstanding. The first five minutes are worth checking out, if you have a chance, but there are far better options out there if you're looking to invest more time (starting with Cartoon Network's own Powerpuff Girls: The Fight Before Christmas). Still, this does offer one of the better animated horror/holiday crossover options, if you're looking for something specific.
00's Comedy Erin Snyder Fantasy Horror Special