Book Review: Christmas on Ganymede and Other Stories

By Lindsay - December 02, 2013
Christmas on Ganymede and Other Stories
Edited by Martin H Greenberg, 1990

I was so excited when I found this book! A collection of sci-fi themed Christmas stories, just the thing to break up the Christmas monotony, right? 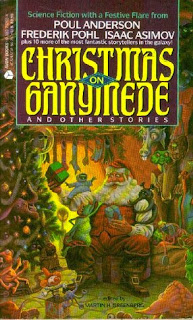 Now I know why I kept finding copies of it for a dollar.

But let’s be more specific, shall we?

“To Hell with the Stars” Jack McDevitt, 1987
To hell with your pessimistic cliche attitude, Mr. McDevitt, warp drive might still be possible - 1 Star

“Christmas on Ganymede” Isaac Asimov, 1968
Cute humor story, fine for what it is - 3 Stars

“The Falcon and the Falconeer” Barry N. Malzberg, 1969
Okay example of mysticism, not my thing - 2 Stars

“Happy Birthday Dear Jesus” Frederik Pohl, 1956
Starts really strong, but the cutesiness of the setting takes over and the ending chickens out big time - 2 Stars

“The War Beneath the Tree” Gene Wolfe, 1979
One of the best stories in the book, dark and horrific, well in tone for December - 4 Stars

“The Season of Forgiveness” Poul Anderson, 1973
Decent, but at this point in the book, decent wasn’t impressing me - 2 Stars

“Christmas without Rodney” Isaac Asimov, 1988
Cute, but read like a story that was cut from I, Robot for not having an ending - 2 Stars

“Christmas Treason” James White, 1961
It’s almost good? The idea is neat, but the plot “twists” are so incredibly dated today that I just had to sigh - 3 Stars

Hits and misses aren’t that surprising for an anthology, but still I was disappointed. Nothing really blew me away, although most of the stories were at least okay.

In the end, it averages about 2.6, which sounds right. Not terrible, by any measure.

Because all credit to these authors, but it’s not their fault that Mainlining Christmas’ collection of Christmas stories has amazing sci-fi that leaves theirs in the dust.
90's Book Lindsay