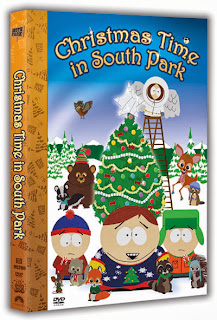 This is a collection of South Park episodes I found on Netflix. I guess it was released on DVD originally.

I'm not the world's biggest South Park fan, but I've seen a handful of episodes, some of which were brilliant. Others... not so much.


Mr. Hankey, the Christmas Poo (1997)
Jesus, really? All right, the premise of this episode revolves around magical, talking Christmas poop. I think there's supposed to be some sort of message about political correctness or something, but mostly it's just juvenile humor about poo.

Oh. Okay. Wikipedia sheds some light on this. Apparently, Mr. Hankey was supposed to be the main character of the show. Not this episode; I'm talking about South Park as a whole. An earlier version of their pitch was for "The Mr. Hankey Show."

Yeah. That would have been much, much worse.


Merry Christmas, Charlie Manson (1998)
This was a little better, thanks in no small part to Mr. Hankey playing a far smaller role. The episode revolved around the boys going to spend Christmas with Cartman's relatives. It turns out Cartman's family is as horrible as Cartman, which is a funny idea but kind of awful to watch. One of Cartman's relatives breaks out of prison along with Charlie Manson. They come to Christmas, as well, and things get progressively more screwed up. There's a plot twist when Manson is gradually redeemed.

It's fine - certainly better than the previous year's Christmas episode - but it's not particularly clever or insightful.


Mr. Hankey's Christmas Classics (1999)
This one forgoes the plot altogether and instead is just comprised of musical numbers introduced by Mr. Hankey. Once again, the Mr. Hankey sequences were pointless. The rest was a bit mixed. Several of the songs were amusing, though none were fantastic.


A Very Crappy Christmas (2000)
This was a bizarre episode which incorporated footage from the "Spirit of the Holiday" short where Jesus fights Santa. The plot involves the boys making their own Christmas short to remind people what Christmas is all about. Unfortunately, it also involves Mr. Hankey and his family. Yes, now he has an alcoholic wife and three kids, all made of poo. It's extremely weird.

The idea of having the Santa Vs. Jesus short made by the main characters was kind of inspired and worth a few laughs. The scene where they're recording the dialogue is particularly clever. Overall, this is just an okay episode, but that's about as good as this collection's gotten so far.


Red Sleigh Down (2002)
Finally, an episode I can recommend. The plot of the episode is kicked off by Cartman's "Naughty-Nice" accountant informing him that it's virtually impossible for him to land on the nice list. I almost fell over laughing during this scene alone. In an attempt to get a robot toy he wants, Cartman sets out to "bring Christmas to Iraq." He enlists the help of Kyle, Stan, and Mr. Hankey (who - fortunately - has a pretty minor role to play), and sets out to convince Santa to bring them the holiday.

Santa gets shot down, captured, and tortured, so the boys track down Jesus for help. The last act is in extremely poor taste, but is utterly hilarious. This one succeeds where the others failed miserably.


It's Christmas in Canada (2003)
Another enjoyable episode, but nowhere near as funny as Red Sleigh Down. This one starts with Kyle's adoptive brother being reclaimed by his biological parents who are empowered by a new law passed by Canada's new Prime Minister. The episode quickly spins into a Wizard of Oz parody that's solid, if not hilarious.

The episode's enjoyable and - for a few brief moments - even a little sweet. Best of all, Mr. Hankey doesn't even get mentioned.


Woodland Critter Christmas (2004)
Another good episode thanks in no small part to the exclusion of Mr. Hankey. At least, I think it was good - I kind of enjoyed it. But then, I'm weird.

The episode starts with a John Denver vibe as it introduces a bunch of woodland creatures getting ready to celebrate Christmas. They meet Stan and get his help, first by making them a star for their Christmas tree, then by building a manger for the birth of their savior, and finally by killing a mountain lion who's planning to eat their savior.

Then it turns out their savior is actually the son of Satan. Things get progressively weirder as the episode progresses. It's bizarre and messed up, but kind of fascinating. It's funny, but most of the humor isn't really the laugh-out-loud variety. Honestly, it has more of a horror tone than anything else.

The ending has a twist that pulls the episode back to some semblance of reality (or at least as close as the show comes to it). There were some sections I thought dragged, but overall I liked this one quite a bit.

And that's it. The first half of this compilation was pretty awful, but the quality improved immensely once I got to the second half. "Red Sleigh Down" is something I'd recommend to anyone who isn't easily offended: it's up there with some of the series' better episodes. Those of you who have a fondness for the show should also check out "It's Christmas in Canada" and "Woodland Critter Christmas". Both are enjoyable in different ways.
00's 90's Comedy Episode Erin Snyder Fantasy