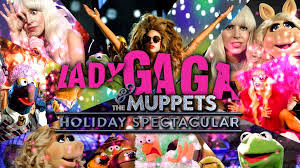 Let's take a moment to ponder, in all its complexity and multitude of facets, the phrase, "missed opportunity."

She's a performance artist. And a damn good one, if her popularity is any indicator.

Hell, she's practically a Muppet herself. She should be juggling porcupines with Gonzo - she'd be awesome at that. Why didn't she hang out with Animal or hire the Swedish Chef as a costumer? Her interactions with Miss Piggy should have been legendary, not trivial.

Like I said: missed opportunity. Instead, we got an hour of her singing songs off her new album, broken up by the occasional Muppet segment that's several notches below the quality we've come to expect from their Youtube channel.

The Muppets phoned this one in. Not that I blame them: they didn't receive top billing and were only in a small fraction of the special. For something called "Lady Gaga & The Muppets' Holiday Spectacular", there wasn't nearly enough of anything Muppet, holiday-related, and/or spectacular.

There were a few cool moments. "Baby, It's Cold Outside," sung by Lady Gaga and Joseph Gordon-Levitt, was pretty good. Also, it's nice to see the Muppets associated with content that's not appropriate for kids again.

But, discounting two brief music gags, only two of this special's ten songs had anything to do with the holidays, and only four were performed with Muppets. That's an insult to multiple generations of Muppet holiday specials and movies.

This thing's up on Hulu, but unless you're obsessed with Gaga, you should save yourself the trouble. Just track down the duet with Gordon-Levitt on Youtube or something. Hell, that's not even required viewing.
2013 Erin Snyder Musical Puppet Special Variety