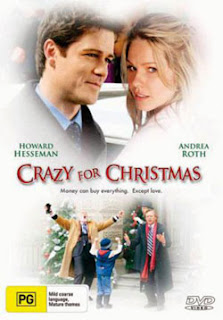 Once you’ve seen one Christmas dramedy with a side of romance, you’ve seen… well, you’ve probably seen a horrible movie, but isn’t that why we’re here? To come together, in this joyous season, over the wonders and horrors that Christmas inspires in us all.

Crazy for Christmas is a tv-movie about a single-mom limo-driver who gets a last-minute job on Christmas to drive an old rich guy around while he gives copious amounts of money to strangers and acts suspiciously excited about getting to know her. You already know he’s her dad, right? I mean, I knew from the first scene they had together. Erin thought maybe the guy was Santa. No such luck.

Shannon (limo-driver) spends an hour and a half trying not to take the guy’s money and pitching awkwardly written emotional fits. I mean, they could have built a structure here where her reactions made sense, but no. She doesn’t trust him from the start, and then when he finally levels with her, she freaks out over something that happened 30 years ago and wasn’t set up in act one.

She comes around, of course, luckily for her kid’s college fund. Plus there’s the reporter dude who, by virtue of the fact that the camera has spent any time on him, we know is destined to fall for the lovely lady limo-driver. That happens too.

It’s not actually terrible straight through. There are some good jokes, and it occasionally rises to almost decent.

But so much of it is about a lonely guy trying to give money to a woman who’s poor, and seeming really genuine and nice about it, and her refusing him for what are very poorly articulated reasons. It’s just hard to accept. Hey, let’s solve all your financial problems and give your kid a new family member who seems to adore him, no strings attached. Deal?

I’m not going into the various ways in which none of these people live or work in New York City believably.

There are a number of minor characters. Several minor minority characters. I felt uneasy throughout, not sure whether I should applaud them for hiring a somewhat diverse cast, or whether I should be repulsed by the way the stereotypes so clearly circled around the main, white-bread couple. I mean, besides the woman, the love interest, the son and the rich guy, the next most important characters are the prim gay lawyer, the supportive black coworker, the hungry fat coworker, the crazy old neighbor lady with the strong “New York Accent”, and the multitudes of variously heavily accented “New Yorkers”.

Crazy for Christmas starts out meh, rises to semi-okay, but by the end, it’s just another hour and a half you could have spent doing something fun, like ignoring your families’ phone calls.
00's Comedy Dramedy Lindsay Movie Sucks