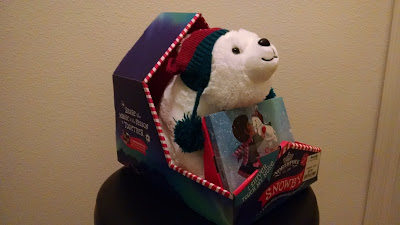 A large proportion of the Christmas merchandise we'll be looking at this year is branded "Northpole", thanks to the Hallmark TV-movie of the same name. For whatever reason, we found piles of this stuff on clearance last year. They're making a sequel and pushing out new merchandise to stores this year, so I guess it couldn't have done that badly.

We found this thing at Marshalls in early November going for $5.99. His price tag advertises that he's marked down from $12 and up. I have no idea where they got that number: looking online, I'm seeing $20 in most places. Regardless, given the bear's size and action feature, six bucks seemed cheap enough to pick up. 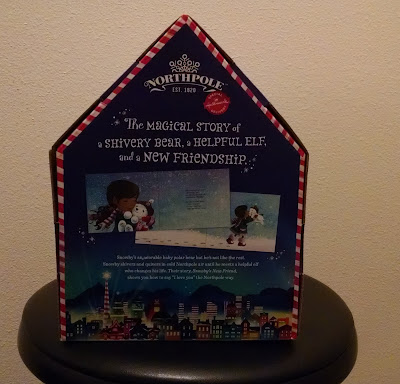 I have no idea whether this character appeared in the movie or not. Apparently, he's a bear who gets cold in the arctic winter. He comes with a short book in which a Christmas elf gives him her hat to keep him warm. So... not exactly Shakespearean drama.

The main selling point is that the bear makes noise and vibrates when you touch his nose. Here's the feature in action:


Cards on the table here. We bought this intending to crack a few jokes about its vibrate feature and maybe imply the sounds were made by some kind of demon trying to claw its way towards you. That was my first impression, anyway.

But when I got it home, took it out of its box, and looked it over for a while... I don't know. I guess the little guy grew on me. The fur is extremely soft without overdoing it, and the bear's expression is awfully cute. Even the accompanying book has its charm. It's definitely intended for young children, featuring heavy cardboard pages and rhyming text. It's sappy as hell, but - again - it's too cute to hate. 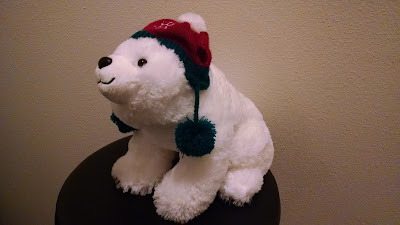 The bear is about nine and half inches tall and ten or eleven long. His battery pack is contained in his butt.
Erin Snyder Toy