The Borders of Christmastown: Some Thoughts on what are and are not Christmas Movies 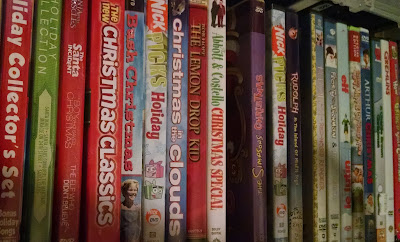 There are plenty of lists out there trying to pick the best and worst Christmas movies of all time (most of those lists are full of crap, but that's not relevant). Lindsay and I spend a lot of time going through those lists looking for anything we've missed, and this often leads to an existential quandary.

What the hell is a Christmas movie?

Sometimes, it's easy. Elf, for example, is a movie set at, about, and concerned with the holidays. I've never heard anyone claim otherwise. Pull out the holiday elements, and you're literally left with nothing.

At least, all of that's true under my definition of Christmas. If you're preoccupied with the idea that Jesus is the reason for the Black Friday rush, then you likely have very different thoughts on whether Elf has anything at all to do with Christmas. Also, you need a goddamn history lesson.

But for the rest of the world, it's a Christmas movie. Almost as much so as Miracle on 34th Street, which is arguably one of the two archetypal holiday films.

Funny thing about Miracle on 34th Street, though: it was released in the summer, and the premise was obfuscated in ads to conceal its holiday elements. All of this was for financial reasons: the studio believed they'd make more if it came out in summer, but that June audiences would avoid something set at Christmas.

From a business perspective, Miracle on 34th Street wasn't released as a Christmas movie: it was, in fact, a summer movie. I'm not suggesting this is a remotely meaningful metric, but it's worth reflecting on how many movies are associated with the holiday due to a December release date. Consider Children of Men: it's often cited as a Christmas film, though its connections are somewhat dubious. There are certainly parallels with the nativity, but the movie seems to be set in November, not December. But because it was released in the US in December and those parallels were played up in its advertising, it's holiday cred became stronger.

What about that other quintessential holiday classic, It's a Wonderful Life? Only a portion of the film is actually set at Christmas Eve: the rest is told over the course of the main character's life. How much of a movie needs to be set at Christmas for it to qualify?

It's a profoundly difficult question to answer. Only a small portion of Holiday Inn actually takes place around the holidays. The movie is set over the course of a year, devoting a song to each of several holidays. But it's the origin of the song White Christmas, and it starts and wraps up on December 25th. Surely it qualifies on a technicality, if nothing else.

But what about Sleepless in Seattle? Only the opening of that movie falls on Christmas, and the rest spirals towards Valentine's Day. Coincidentally, it provides a very similar timeline as American Psycho (though Bale can't possibly compete with the cold-blooded sociopath portrayed by Meg Ryan). Both movies spend a comparable amount of time on the holidays before moving on; one we wrote up for the blog, while the other we didn't.

Here's the difference: Christmas plays a clear role in Sleepless in Seattle, but not in American Psycho. The Christmas Eve sequence is a key element in the overall plot of Sleepless, but you could easily shift the time line in American Psycho and end up with an almost identical script.

But this is a case study, not a hard rule. There are plenty of Christmas movies which barely acknowledge the holiday, or where the setting could be shifted with only minor consequences. Iron Man 3 is an obvious example: the holiday setting was almost completely superfluous. So why is it up on the blog?

One rule we've adopted is that any movie where the majority of the story plays out over the holidays is fair game, even if it doesn't impact the story, tone, or theme. I believe that, provided the timing is well established and present, it qualifies.

But that brings us to an even harder question: which holidays?

Of course, Christmas qualifies as Christmas, and I can't imagine anyone objects to the depiction of Black Friday as an extension of the same holiday. But what about Hanukkah? Unlike most celebrations this time of year, Hanukkah does not seem to be related to Christmas, at least in origin. Christmas, as I've said many times before, is really an extension of  Roman solstice celebrations, which are in turn borrowed from other cultures. But Hanukkah is connected to something else entirely.

It's worth noting that, while Hanukkah isn't related to Christmas in its origins, its status in American Jewish culture is absolutely a response to Christmas. From a religious point of view, it's not at all an important holiday: it's simply been elevated culturally so Jewish kids don't feel like they're getting ripped off every December. Likewise, the specials and movies centered around it are clearly attempting to duplicate those for Christmas. While it's inaccurate to say that Hanukkah originated from the same sources as Christmas, it is effectively offered as an alternative to Christmas. As such, we consider those specials - and the accompanying holiday music - part of the Christmas tradition (to the chagrin of the Jewish side of my family, I'm sure).

Speaking of alternate Christmases: we still haven't gotten around to reviewing a Kwanzaa special, but we'll find one eventually. It was quite literally created to offer another option, free from the cultural, historical, and racial background of Christmas.

The same goes for winter solstice festivals and whatever Roman holidays you want to dredge up. As far as I'm concerned, any Greco-Roman winter holiday on or near December 25 is synonymous with Christmas, and any other winter solstice celebration is still close enough to apply.

This actually extends to fictitious holidays created as Christmas stand-ins, as well. If something's set in a fantasy world and clearly intended as a mirror for Christmas, we'll cover it in a heartbeat.

In addition, it almost seems like a waste of time to explain why I believe Saint Nicholas Day counts. If it weren't for the fusion of that saint and Odin, Christmas wouldn't be the same: I've always considered it an extension, though it rarely comes up in movies or specials.

Now for the two hard ones: Thanksgiving and New Years. We're actually still undecided on these. As a rule of thumb, we've been avoiding movies fixated on them specifically. This is easier for Thanksgiving, which hasn't produced much in the way of specials or films. New Years is quite a bit harder: there are quite a few movies that end on New Years Eve and tie into the symbolism of the changing year. Many of these, such as Ghostbusters II, are also partly set over Christmas. We've been playing these by ear so far, but don't be surprised if we eventually widen the scope to include Thanksgiving and New Years: after all, those are fundamentally the start and end of the holiday season.

But not everything is about dates. We've looked at Rudoph's Shiny New Year, Rudolph and Frosty's Christmas in July, and Grinch sequels set at Halloween and Mother's Day. None of these are, strictly speaking, Christmas, but we've included them as honorary holiday fare, on the basis of their characters' Christmas connections.

But we do look for more than a trivial connection. The Wizard of Oz, for example, is often associated with Christmas due to being broadcast in December for decades, but that's not enough for us (even with the additional connections between L. Frank Baum and the Santa Claus mythology).

Ultimately, I'd say that to be a Christmas movie, a film needs to meet at least one of the following criteria:

1. The majority of its run time is set on or leading up to Christmas - Examples: Iron Man 3, Ghostbusters II, Happy Christmas

2. Christmas plays a pivotal role in the movie - Examples: While You Were Sleeping, Sleepless in Seattle, It's a Wonderful Life

3. It features characters or tropes closely associated with the holiday - Examples: Rudolph and Frosty's Christmas in July, Father Christmas, The Grinch Grinches the Cat in the Hat

4. It is about Christmas or a Christmas alternative - Examples: Prometheus, Children of Men

5. It is the origin of a longstanding Christmas song or tradition - Examples: Holiday Inn, Meet Me in St. Louis

I'd argue more or less everything we've reviewed on the blog meets one or more of these criteria, though there are a couple things that might push the boundaries. For example, Frozen includes several elements that are ambiguously Christmas. I'd argue that the snowmen brought to life and reindeer (complete with jingle bell AND flight gags) are sufficient, but it's admittedly a close call for a movie about an ice witch set in summer. And speaking of ice witches - The Lion, The Witch, and the Wardrobe is also a close call, despite a brief appearance by Santa. We don't generally consider a cameo sufficient to meet rule #3, but in this case there's a strong argument the movie fulfills #4, as well.
Article Erin Snyder