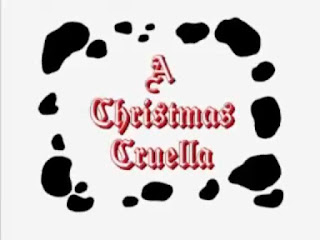 Whoa. I have seen episodes of this show, but that was many many moons ago. So I was cringing a little and expecting this to be awful. Unexpectedly, it was fairly delightful.

Plot-wise, it’s a pretty standard Christmas Carol riff, but the writing and voice acting made it work really well.

After a brief intro with a cute joke about puppies being able to smell what presents are through the wrapping paper, we dive straight into Dickens, with Cruella (briefly in a fabulously ridiculous Christmas-tree dress) as Scrooge. She hits all the classic notes: why should people have the day off, cruelty to carolers, charity workers and the homeless, and she fires Anita. The show adds a few excellent nonstandard moments, however (for example she also exults in Christmas as a glorious celebration of capitalism, and she turns snowmen into snow devils by hitting them with her car). 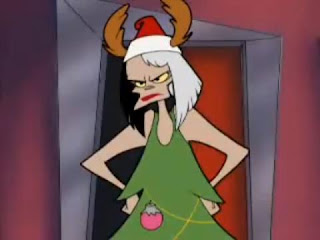 Cadpig (one of the main puppies in the show) appears as the Ghost of Christmas Past and takes Cruella through several of her childhood Christmases. Turns out that all young Cruella wanted was a puppy, but not only didn't she get one, she was cared for by a succession of nannies reading notes from increasingly distant parents. The last note was addressed to “allowable tax exemption, Schedule C, line 4”. Sure, it was funny (really funny, as Cruella takes her somewhat-justified rage out on anyone foolish enough to cross her) but also kinda dark for a Saturday morning cartoon about goofy dogs.

Cruella still isn’t moved by anyone’s plight but her own, so Rolly (the fat puppy) comes in as the Ghost of Christmas Present. He brings Cruella to Anita and Roger’s place, where the running gag is that they got each other great gifts that they have to immediately return because she lost her job. Also, Lucky (the third puppy with a major role in the normal show) has a turn as Tiny Tim, as he has caught “piney-paw-itis” from a pine-needle in his paw.

At this point, Cruella calls bull on the whole enterprise: 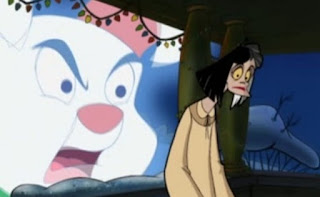 She maintains that if Christmas is about love, it should be about people loving HER, so Rolly abandons her to the Ghost of Christmas Future. Future is played by the only main character not to have a role yet: a chicken named Spot. Spot brings Cruella to the auction of her belongings and reveals that she’s not only deceased, but buried in a pet cemetery. This ignominy is too much for even Ms. DeVil, and she awakens back in her office on Christmas morning.

She’s determined to make it up to people and give out gifts for Christmas. But it’s Christmas, so everything is closed except her office… so she gives out hilariously random office supplies.

Throughout the ending, the balance between sentiment and lunacy was well handled. The writing was clever and the production solid: this might be one of our favorite spins on A Christmas Carol. 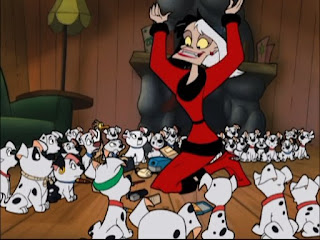 I have no idea if the other episodes of this show were any good, but this one was a lot of fun.
90's Comedy Episode Lindsay