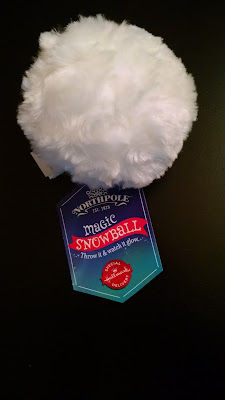 This is the Northpole Magic Snowball, produced by Hallmark and intended to tie to their TV movie of the same name. I think they missed an opportunity when they failed to market it as a Snow Tribble.

I picked this up at Wallgreens last year. I was actually more interested in getting something else from this line, but I had a coupon that would knock five bucks or so off the price if I spent above a certain amount on Northpole branded crap. If memory serves, this was going for $5, anyway, so it basically negated the price.

By the way, what's pictured above is all the packaging this came with. The tag insists it's for decorative use only, but there are no other warnings about throwing it at others. It does mention that nonreplaceable batteries are included.

That's right - you're not just getting a wad of white fluff: this has a feature. Throw it against a hard surface such as a wall, floor, or human face, and it starts blinking green and blue. Why green and blue instead of green and red? Who the hell cares?


So, it's nothing spectacular, but it functions as advertised and is relatively bright. On top of that, I've tossed it several times with some force, and it hasn't stopped working yet. So, it seems to be resilient, at least until those "nonreplaceable" batteries die.
Erin Snyder Toy