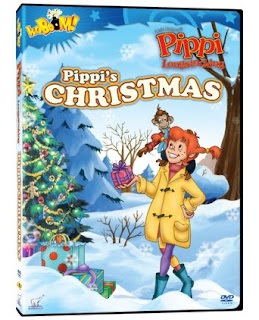 I love Pippi Longstocking, although my love has not led me to actually read the source material or seek out other media about the character. My love is mostly confined to the 1988 movie being a major part of my childhood. If my childhood had instead contained the 1998 animated series, I might not have the same affection for the character.

Not that this was actively bad. It was just boring, and these days boring is the death knell for Christmas media for us.

The opening credits, despite being a bit too long, led us to hope for some sort of adventure or excitement. No dice. The entire plot was about two thieves (recurring characters) trying to steal money so they can have food and a place to stay on Christmas. They have no money, and they try various schemes, first to try to make enough to get dinner and go to a hotel, and later they just try to get arrested so they’ll have someplace warm to sleep.

They get caught, or almost get caught, Pippi makes an odd excuse for them, all characters separate, and then we repeat this cycle several times. And I couldn’t tell if she was making excuses because she likes them and didn’t want to see them go back to jail, or because she was planning the ending from the start, or because she genuinely believed that “No one could do something rotten on Christmas!”

At the end, she invites the two back to her place to have Christmas dinner and stay over, even giving them each a gold coin as a gift.

There just wasn’t much to this episode: the plot, the characters, the humor were all quite thin.

Although a large part of my trouble with it, I think, in the end was the voice acting. Pippi was just so one-note. And the voice actress is one I recognize: she’s been Muffy Crosswire (rich, spoiled little girl) on the PBS series Arthur since 1996. I just couldn’t hear her as a different character.
90's Comedy Episode Lindsay