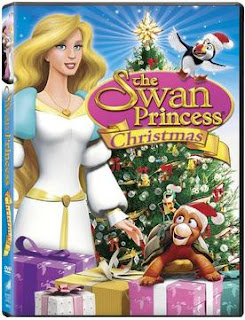 The Swan Princess Christmas is the third of four direct-to-video sequels to The Swan Princess, a movie which failed to make ten million dollars during its entire theatrical run and has a Rotten Tomatoes score of 44%. This is the first and only installment of the franchise I've ever seen, so I can't attest whether the abysmal writing, direction, and animation were par for the course, or if this fails to live up to the series's pitiful legacy. Assuming Wikipedia is right, this was the first in the series to be computer animated.

For the majority of this movie's run time, the plot is essentially incomprehensible. The two leads, Derek and Odette, are getting ready to spend their first Christmas together. They have three talking animal sidekicks who almost never interact with them: a puffin, a turtle, and frog trying to get women to kiss him. And there's a cat who's working with the ghost of the villain from the first movie.

To get a Christmas tree, Derek goes snowboarding in the woods and kills a saber-toothed snow leopard. This didn't have much bearing on the plot, but it took up a decent amount of time, and was certainly one of the movie's two most "memorable" sequences. The other involved a troop of acrobatic orphans singing an auto-tuned version of "Christmas is the Reason".

The ghost stuff is closest this movie gets to coherent, so let's start there. The ghost is trying to come back to life, though it turns out this requires a few steps. First, he needs the guy who killed him (Derek) to open a chest containing a portal to... er... I'm guessing Hell. Until then, all he can do is communicate verbally with the cat and occasionally scare a few people.

Once he accomplishes this, he's able to appear as a ghost. He's got the usual ghost powers: becoming incorporeal, invisible, and floating, on top of some weakened magical abilities.

At this point, he immediately starts trying to destroy Christmas. It's not entirely clear whether this is a prerequisite for coming back to life, or if he just hates Christmas for some unstated reason. Probably both. Regardless, Christmas music is his kryptonite: it weakens his magic and makes him visible, which winds up exposing him to Derek almost immediately.

There's a bunch of subplots involving minor characters that aren't worth discussing before the main plot, which is also not worth discussing, kicks into gear. But what the Hell: the villain destroys the kingdom's Christmas tree, and the resulting sadness reincarnates him. He kidnaps Odette, transports her back to Swan Lake, and turns her into a swan. Derek shows up, so he turns himself into Man-Bat and there's a fight.

The villain wins, wounding Derek. Odette's a swan trapped under some thorns. Man-Bat swoops towards her love to finish him off.

So she sings a Christmas song, which kills Man-Bat, only to discover Derek's already dead. She seems awfully upset, so she sings another song, which resurrects the ornaments from the destroyed Christmas tree, which in turn resurrect Derek

Or... I don't know. Something like that. It is really, really hard to determine what's supposed to be happening in this movie.

I think we've established that the plot and characters are horrible in this thing. But how about the animation? EVEN WORSE. This isn't quite the worst looking animated Christmas movie we've seen, but unless you've been playing the Mainlining Christmas home game, there's a very good chance it's worse than any CG Christmas movie you've ever seen. The characters are wooden and simplistic, and they never interact right with either their environments or each other. I understand why movies made in the early 00's occasionally got away looking this bad, but this was made in 2012 - there's really no excuse.

The majority of the music in this is badly auto-tuned, which along with everything else in the movie, is anachronistic and annoying.

The sequence with the jumping orphans singing about Jesus is firmly planted in the "so bad it's good" camp, and the snowboarding scene comes close. But other than those, the movie's tedious and obnoxious elements are too boring to laugh at.

With just one review on Rotten Tomatoes, this doesn't even have a score, meaning you don't have to take the advice of mainstream critics: just follow their lead and watch something else. This one was awful.
2012 CG Erin Snyder Fantasy Movie Sucks