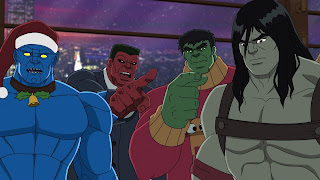 Remember a few years ago, when Marvel animation was at its peak? In a relatively short period of time, we got Spectacular Spider-Man, Wolverine and the X-Men, and Avengers: Earth's Mightiest Heroes, all great shows.

Then something went wrong. Horribly, horribly wrong. Overall, the Disney acquisition of Marvel was a plus. It gave them more money to produce movies and live-action TV series, and the comics actually seem to have benefited. But the quality of their animated programs plummeted. Guess that's the price we have to pay.

This, Ultimate Spider-Man, and Avengers Assemble all appear to be in continuity with each other. And, from what I've seen so far, all of these shows suck.

To be fair, I've only seen two episodes of Agents of S.M.A.S.H., and one was the pilot. But the premise was misguided to begin with, and nothing I've seen suggests they're able to salvage the show.

This episode is, of course, the Christmas one. It opens on Christmas Eve, when the Hulks fight Blastaar and a bunch of monsters kind of resembling the things from Tremors 2. They save the day but get blamed for the damage caused by the battle. On their way home, Rick wishes things were better. Out of the window, there's a light in the distance that looks like a shooting star but is revealed to be an alien space ship.

Cut to a Hulk Christmas special in which everyone seems to have everything they want. Red Hulk is president, She Hulk is a successful actress, A-Bomb is dating Eliza Dushku... you get the idea. Their Christmas special is interrupted, however, when Rocket Raccoon comes down the chimney and starts shooting up the room in an attempt to find the device mentally constructing this illusionary reality.

By now, you're probably thinking this sounds pretty cool and wondering why I'm complaining. To be fair, as zany ideas go, this one was pretty well conceived. But the execution just fails miserably. Between the bad animation, the poor designs, uninspired voice casting, and the lack of tone or commitment to the premise, the whole thing devolves into a mess of safe-for-kids jokes. It's trying so hard to be campy fun, it just comes off as idiotic.

There are a handful of jokes in this thing that save it from being unwatchable, but overall it just doesn't work. It felt like the creative talent had the right idea but lacked the ability to actually make it work.

I did like the Christmas special within a constructed reality gimmick, but like everything else in this episode, it never achieved its potential.
2014 Action Comedy Episode Erin Snyder Science Fiction Superhero