The Librarians and Santa's Midnight Run (2014) 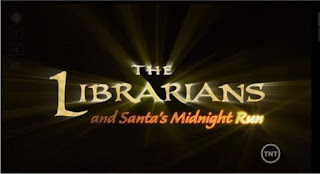 As a rule of thumb, when there's an episode we're recommending that's embedded in the middle of a series, we advise watching it in context to get the needed background. This is different. We watched the first three episodes of The Librarians, and we think you're better off skipping to the Christmas episode.

It's not that the earlier episodes were bad; it's more that they are generic as hell. They feel like an uninspired fusion of Doctor Who, Leverage, Warehouse 13, Buffy the Vampire Slayer, the X-Files... hell, basically every genre show of the past two decades shoved into a blender. The result comes off as mediocre in every possible way.

Then along comes the Christmas episode, guest starring Bruce Campbell as Santa Claus, and the quality spikes. 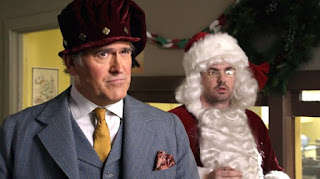 Story-wise, it's pretty generic Christmas fantasy stuff. The episode opens with Santa abducted by the Serpent Brotherhood (I promise, you're better off not having seen their first episode), a secret society planning on killing Santa and harvesting the magical energy he's collected. The Librarians are called in to rescue the immortal legend, which they manage fairly easily.

They go on the run, aided by Santa's magic and their connections. Santa, having spent the previous year collecting the world's goodwill, needs to return that magic to humanity, but he's been drugged. As a result, he starts slipping into older incarnations. I could have done with a few more of these, honestly, but the show gets bonus points for including Odin (I'll even overlook the absurd claim that Odin was the first Santa Claus - there was no single origin). There's a side story when the team's thief is lent Santa's magic hat, only to be possessed by Christmas cheer.

The bad guys, having stolen Santa's sleigh, catch up to the Librarians in Alaska, leading to yet another magical battle. Fortunately, the competency of the villains in this series is somewhere between Gargamel and Doctor Claw, so the heroes manage to out-think them without too much effort. The episode ends with a novel twist on Santa's trip around the world, which gets handed off to the Librarians' guardian/leader, played by Rebecca Romijn.

The episode's strength comes from its sense of humor, pacing, and use of myth. A lot of the heavily lifting is done by Bruce Campbell, who plays his quirky take on Santa Claus with the right mix of levity and heart. There's really no one better at pulling gravitas out of camp, and he does so masterfully here. The role was essentially a mix of pagan solstice god, magical spirit, and jolly Ghost of Christmas Present - an odd conflation of archetypes that worked well here (again, thanks largely to Campbell).

Rebecca Romijn also gets a chance to shine as the requisite holiday cynic who has to save Christmas. Romijn, of course, is best known for playing Mystique in the X-Men movies. She's a great actress who felt underutilized in the first three episodes, so it's nice to see her given something to do.

The resolution touched lightly on the "true meaning of Christmas" trope we see so often in these things. It's notable that - unlike almost everything else I've seen so far on this series - they managed to handle this with a bit of subtlety. There's just a hint of the solstice, a twist on the Santa myth, and a bit of old fashioned holiday schmaltz to their answer, and it works surprising well. If I'm being completely honest, I'd have preferred more solstice and less sentimentality, but that's just me.

All told, this was a very good episode. Perhaps it's the turning point on what becomes a great series - I've only seen this far to date. If you have an hour to kill, I recommend giving this one a shot. Just don't bother watching the first three episodes: those weren't nearly as good.
2014 Adventure Comedy Episode Erin Snyder Fantasy Highly Recommended