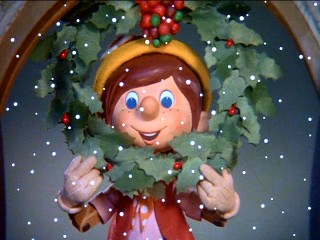 Lindsay unearthed three Rankin/Bass stop-motion Christmas specials we'd never reviewed (or heard of, for that matter), all of which were available on a single DVD. Naturally, we ordered the damn thing.

Not surprisingly, there's a reason we've never heard of it.

Pinocchio's Christmas is a bizarrely warped mashup of several early scenes from the Adventures of Pinocchio and the usual Rankin/Bass Christmas tropes.

The story starts out with Pinocchio learning about Christmas from Geppetto, who sells his boots to buy his son a math book. Pinocchio promptly sells the math book, planning to use the money partly on himself and partly to buy his dad a Christmas present. But first he comes across the Fox and the Cat, who convince him the coins will grow into a tree of gold if he buries them. Naturally, he falls for this, and they steal the money.

With the exception of the Christmas elements, this section is actually pretty accurate to the original, at least according to Wikipedia's description of the book. Same goes for Pinocchio's origin: he was a magical piece of talking wood before Geppetto carved him into a marionette.

At any rate, Pinocchio still wants some cash, so he takes a job performing in a puppet show, where he falls in love with another marionette. He steals her, gets chased out of town by the police, and winds up with Lady Azora, which is what we're calling the Blue Fairy this time. After going through the requisite "lying" sequence, he's re-introduced to Doctor Cricket, whose first name is expressly not provided for fear of rousing Disney's legal department.

The Fox and Cat, meanwhile, make arrangements to sell Pinocchio to a rich Duke who wants a unique Christmas present for his kids. They fast talk him onto a sleigh, claiming it will bring him to the North Pole, only for him to be taken to the Duke's mansion, where he's stuffed in a box. A few minutes later, he's unwrapped, and has thawed the Duke's cold heart with a crappy song he learned from Azora.

Pinocchio's no longer imprisoned, but he's still a long way from home on Christmas Eve with no way to get back in time. Unless....

Oh, for Christ's sake. Yeah, Santa shows up in a sleigh pulled by reindeer and flies him home to Geppetto. Kringle takes off, only for Azora to pull up in a sleigh drawn by mice. Oh, and that marionette Pinocchio liked has been brought to life, too. Why not?

There's some brief moralizing, followed by a montage of sequences from later in the story. And then, finally, the hour-long special draws to a merciful close.

Like a lot of the later Rankin/Bass, there are good and bad elements. The animation is absolutely beautiful, with the exception of the always unadvised cartoon snow over stop-motion effect. This ends our discussion of what this special did well.

The story is utter crap. There's a reason Disney trimmed a lot of the Fox and Cat stuff from their version - it's tedious and dull. Meanwhile, the Santa cameo is wedged in where it doesn't belong.

At a conceptual level, Pinocchio is a horrible character to work with outside of his redemption story. He's not really likable until he learns his lesson, and he can't reach that point this early. As a result, he's not remotely sympathetic. Why the hell should I care what happens to him?

The plentiful original songs don't do this any favors, either. None are much good, and they do little more than pad the run-time. If they'd done this in thirty minutes, it might have been watchable, but an hour of this crap is downright painful.

If you're a huge fan of stop-motion and Rankin/Bass, this might be worth sitting through to see how far their technique had developed. But everyone else should skip this - it's just not worth the effort.
80's Comedy Erin Snyder Fantasy Musical Special Stop Motion