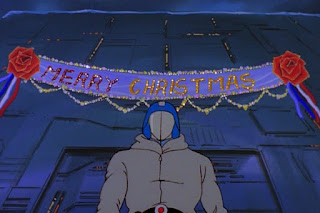 I'm going to have a hard time synopsizing this one.

Alright, this thing opens right before Christmas when three of the G.I. Joes and a pet parrot singing Jingle Bells (this is a plot point) are driving a bunch of donated presents back to their base to give them to kids. When suddenly... they're attacked! A single Cobra plane starts shooting at them, forcing them to pull over and take cover. While they're stopped, a Cobra agent sneaks behind their vehicle and unloads a bag of fake gifts.

The plane takes off, and the G.I. Joes just kind of shrug and decide it's probably not worth worrying about. They return to base and unload the gifts, including those Cobra snuck in. That includes a Trojan rocking horse, because... of course it does.

The Joes sit down for dinner, and we learn that one of them is sad, because his parents always made such a huge deal about Christmas they never got around to decorating the tree or buying him gifts.

The Trojan rocking horse (and yes, it is referred to that way) and the other fake gifts open, revealing miniature Cobra troops, vehicles, and robots. So... it's Christmas, and there are a bunch of toy-sized Cobra planes. Real subtle, guys.

The small Cobra agents manage to deactivate the Joes' defense grid, which lets another nearby Cobra agent use a ray and revert them back to full size. There's an idiotic fight scene where two groups of soldiers are standing less than 10 feet from each other and shooting, but no one gets shot. Eventually, Cobra uses knock-out gas to gain the upper hand.

With the Joes captured, they reveal their incredibly stupid plan, which is to steal the G.I. Joes' vehicles and attack a nearby city. Cobra Commander chains up the Joes in a freezer and taunts them by leaving the keys to their handcuffs in the room. Fortunately, Shipwreck is able to free himself by humping a side of beef.

No. Really. They even played it up with a joke about him and the side of beef having "a meaningful relationship" first. This happened.

They get out and confront Destro, who's been working on the shrinking/enlarging ray. There's another fight, where Destro tries to shrink all of the Joes but only winds up hitting the parrot. After failing to shoot Destro, they just jump him and take his ray gun, which was slightly damaged but still seems to work. They flip the switch and turn the parrot back to normal size, though he stays behind, since he's dizzy. As soon as the Joes leave, he starts growing to monstrous size.

The Joes take Cobra's vehicles and go after them. There's another idiotic fight which ends with Shipwreck's bird showing up and saving a few Joes who are in danger. Of course, he sings Jingle Bells again. And that G.I. Joe who was depressed about Christmas? He randomly feels better. No explanation beyond, "It's Christmas!" is given.

So. That's what happened.

It was AWESOME. I mean, sure, it was stupid. But it was hilariously, ridiculously, awesomely stupid. The animation was crap, obviously, but this thing had Cobra Commander standing in front of banner reading "Merry Christmas." It had a giant parrot snatch Duke from the air. And, most importantly, it had one of the G.I. Joes humping a side of beef.

I ask you: isn't that what Christmas is all about?
80's Action Comedy Episode Science Fiction So Bad It's Good