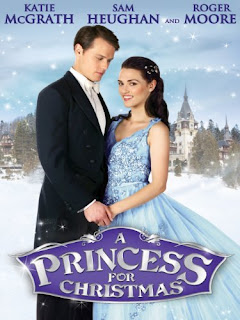 Watching movies for Mainlining Christmas is an enlightening process. We have become professionals. We are resistant to all but the worst writing, acting, directing and design. Today, I’m pleased to share some of our tips for keeping your mental health while watching holiday dreck. The defense mechanisms we’ll be practicing in this session are “Plausible Alternate Plot”, “Identifying Fakeconomics” and “Advanced Foreshaming”.

A Princess for Christmas is a Hallmark Original movie that never believes in subtlety when you could be describing your emotions out loud, and is a great training ground for all of these techniques.

Early on, the movie is full of easy targets for Identifying Fakeconomics. Main character Jules works in a small antique store in Buffalo, New York. She is the primary caretaker of her deceased sister’s two kids, Milo and Maddie. Even with survivor’s benefits of some type, there is no way she could maintain that large, well-appointed house and a full-time nanny on one person’s retail salary, even high-end retail. Especially considering that the owner of the store fires her because he can’t afford to pay her, she probably wasn’t making that much to start with.

Identifying Fakeconomics is all about keeping emotional distance from the story by noticing when ‘movie logic’ tries to make you believe that something is reasonable when it really isn’t. Your next opportunity to practice comes right away, when a British butler shows up at their door to offer Jules $12K and a trip to visit the kids’ estranged grandfather, who is a duke. She refuses at first, but despite her anger at the guy who cut off contact with her sister and brother-in-law, she doesn’t even consider it? Really? That seems unlikely.

This moment is also a good time to practice some easy Foreshaming. Repeat out loud: “But of course they’re going to go anyway.” Give yourself a bonus point if you can snap your fingers just before the jump cut to them being in England happens.

Foreshaming is about identifying plot ‘twists’ ahead of time so that you can critique them before they happen, defusing their power to hurt you. The first few are easy, but there are some tricky ones later in the film.

After a bunch of ridiculous exposition, how many instances of Fakeconomics (and its cousin: Fake-culture) and opportunities for Foreshaming did you spot? Here’s a partial checklist:
At this point, we can also bring in a more advanced technique: Plausible Alternate Plot. A Plausible Alternate Plot is when you can come up with an alternate explanation for the idiotic things happening on the screen. This is an important survival skill if you have the Hallmark Channel in December.

In this movie, when the kids finally meet their ducal grandfather, he seems annoyed to see them and overall cranky about Christmas. There is literally no reason provided for why he invited them for the holidays, but there’s no indication that anyone else did it behind his back. I filled this plot hole with a bit of optimism: maybe there was a secret reason! Milo, as Charles’ son, might stand to inherit all this stuff, right? I mean, all the other elements of the plot are playing by old-fashioned rules. So the Duke invites over the kids from his son’s unapproved marriage to either take them and bring them up ‘right’ or trick them into abandoning any inheritance.

Unfortunately, none of that was in the plot. Not even a little bit. But, the exercise of thinking about it gave me a second wind to continue watching.

Another fun PAPlot here centers on the Duke’s clothing. Played by Roger Moore, he dresses like Dracula. White shirt, black jacket, red cravat or tie in almost every scene. Ashton (the duke’s son, remember) has too-perfect facial features. If you watched this movie with the sound off you could make a real case that it was about a poor American family being tricked into moving into a vampire lair.

I have to warn you to proceed with caution if you’re still watching. No amount of Advanced Foreshaming can help you now, as in quick succession several plot elements, including the grandfather’s objection to Christmas, are resolved unbelievably quickly, completely and foolishly, to the point that even we could not expect it.

Console yourself by calling the exact moment Ashton’s fiance will walk in on Ashton and Jules dancing and having fun together. It’s an easy one.

The rest of the film runs on rails, although there is a bit more bullshit to be called. Note the fact that the Duke (and Ashton to a lesser degree) treats Jules and the kids as if they are just a speshul sparkly exception to the ‘poor, un-titled people are lesser’ narrative he was rocking early on, and Jules seems not to notice how incredibly screwed up that is.

Ashton and Jules get together, the snotty people are offended, everyone dances in pretty dresses. You called all this, because you’re getting good at Foreshaming.

I’ll leave you with one more Plausible Alternate Plot, this one utilizing the technique of pulling in other work done by the same actors. After the movie, Jules does fulfill her promise to not become the idle rich, but to keep working. Unfortunately, as we all saw this summer, that ends badly for her. Having the insufferable and inconsistent character from this film be the one eaten by a mososaurus makes both movies a little better.