Sabrina, the Teenage Witch Christmas Episodes (the rest of them)

By Lindsay - December 10, 2015
Okay, we already watched the Christmas episode in season three. Here's the rest of them. 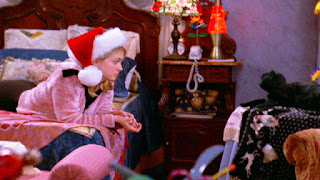 A Girl and Her Cat (1996)
First we have to backtrack to episodes in seasons one and two.

In this episode Salem throws a hissy fit (pun intended), stays out to make the family worried, and ends up catnapped by a little boy who wants a pet. There's a painfully obnoxious montage in this one as well, as Sabrina and her aunts (Hilda and Zelda) search for Salem. The highlights are references to Salem's backstory (he was originally human, but turned into a cat for trying to take over the world), and a scene where Sabrina steals Salem back by dressing as Santa and teleporting into the kid's closet, knowing no one will believe him. Also, Coolio has a cameo as a poster brought briefly to life.

Oh, if you've never seen this show, you might not know that Salem is played at times by a truly ugly puppet cat and at times by a real cat. It's very strange. 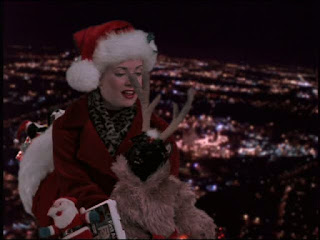 I think weird cameos must be a thing on this show that I didn't notice in 1997 because this episode featured both John Ratzenberger and Johnny Mathis. Ratzenberger plays Santa, which also caused us to realize fully that there is basically no continuity in this show.

Plus a different guy played Santa in the season three episode.

Ratzenberger makes a fine Santa at first. He shows up to help Sabrina find the meaning of Christmas, as she's struck with a magical malady that feeds on selfishness and messes up her spells. He gets more and more obnoxious as time goes on, and the terrible laugh track on this show was already making me twitch. Of course Sabrina ends up finding her generosity by having to fill in for Santa Claus. And she uses her magic to give her friends ridiculous Christmas presents, one of which may involve mind control or personality manipulation. It's terrible how little thought went into this thing. 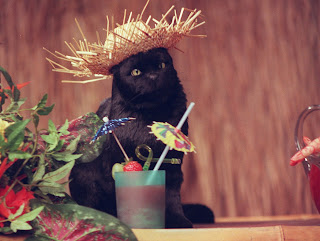 We jump past season three to land in season four, and another terrible episode. In this one, Sabrina tries to change the weather so she can fly to Jamaica for Christmas, but meddling with the weather apparently turns you into a snowman and earns you an audience with Mother Nature. I did like Mother Nature as an executive in a power suit. That was okay.

Sabrina is tasked by Nature with bringing holiday cheer to her aunt's boyfriend, and meanwhile her aunts hire some out-of-work kleptomaniac elves for holiday help. It all goes about the way you think, and then they're snowed in anyway and throw a Jamaican-themed holiday bash over the credits. Random cameo of the episode: Danny Bonaduce, as a 'Partridge in a pear tree.' 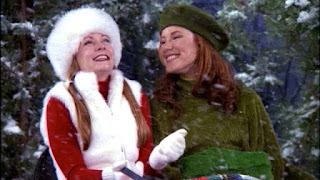 So, I guess the show actually moved forward in time, because it looks like Sabrina lives in an apartment and is going to college. In this episode, she decides to skip out on a family party to join a 'perfect Christmas' with her (roommate? flatmate?) Morgan. Morgan's family starts Stepford-perfect but quickly devolves into passive-aggressive and then into agressive-agressive. Sabrina's efforts to 'fix' the situation are rather painful, and Morgan's brother's obsession with Salem isn't funny, it's super-creepy. Meanwhile, Hilda finds her other flatmate Roxy stayed in their place alone over Christmas to avoid her family, and she calls off the family party to throw Roxy a 'normal' Christmas. This led to another example of Erin tearing his hair out because in every Christmas episode up to this point Hilda and Zelda have served eggnog, and then in this one they don't understand the appeal of this mortal drink. Sigh. 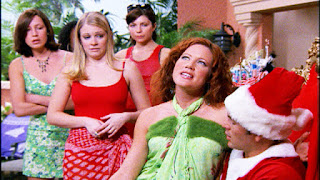 Last season, last Christmas episode. Sabrina, Morgan and Roxy are still the main characters, plus Salem the ugly puppet cat is still around. A smarmy coworker invites the girls to a timeshare in Miami for the holiday. Morgan turned from kind of silly in the previous season to being unreasonable dumb and ditzy. Roxy runs into her mom, who apparently recently got out of prison. Sabrina moves obnoxious mountains trying to get Roxy and her mom to reconcile, only to doubt her judgement after the condo is robbed. Sabrina uses magic to determine the real thief (only AFTER making a huge scene accusing Roxy's mom... WTF?!) and eventually exposes him. And all was right with the world, because I got to turn this show off.

This was a pretty painful experience overall. The super-fake laugh track was grating every second, and even within each episode what they could and couldn't solve with magic was completely inconsistent. Every bit of decent writing or emotion was immediately undercut by nonsensical plot twists or overacting. I think we can safely mark this one Not Recommended.
00's 90's Episode Fantasy Lindsay Sucks