By Lindsay - December 10, 2015
Have you visited your friendly local comic shop this week? You might want to make the trip, some super-fun holiday specials just came out!

I know, I know, Gwenpool? Just go with it and trust me on this one. This hefty issue tells four interlocking stories featuring some of the recent stars of the Marvel U.

The overarching tale follows She-Hulk, as she throws the biggest party of the year to defeat some evil magic. Meanwhile, Ms. Marvel takes out her frustrations with the ubiquity of Christmas on an evil Santa. Hawkeye and Hawkeye team up with Deadpool to catch a holiday pickpocket as a favor to one of Clint’s friends. Gwenpool goes up against a giant sword-snake-thing and enjoys her visit to the main Marvel Universe.

Drunk monkeys! YouTube sword tutorials! Holiday gifts! It’s repeatedly hilarious and occasionally sweet. You may have to be at least passingly familiar with the characters to really love it, but I tore through this with a big grin on my face, and strongly recommend it. 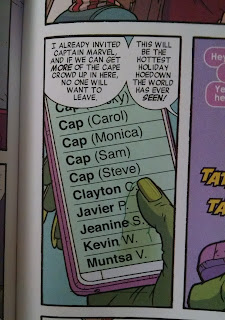 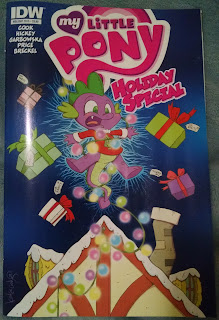 I haven’t read much of the recent MLP comics, but I found it a bit jarring at first and then enjoyable that this has a slightly different tone than the animated series. It’s a bit more slapstick and zany and a smidge more subversive occasionally as well.

This issue features Twilight and Spike trapped by the weather in a train station. They read a few ‘traditional holiday filly tales,’ which each star other main characters. Rainbow Dash is a rather unconventional flying reindeer and Applejack and her family feature in ‘Twas the Night of Hearth’s Warming Eve,’ although I think Rarity’s spin on the Nutcracker was my favorite. I was a bit disappointed that the rhyming and meter in the poem one wasn’t regular, but I’m particular about such things.