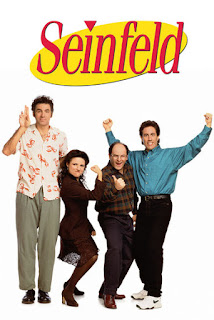 It's hard to overstate how big Seinfeld was in the 90's. It was the top sitcom for four years and the top TV show for two. The subject matter was surprisingly adult for its time slot, and among geeks, it offered a rare opportunity to see our interests cross over with mainstream entertainment.

While Jerry himself was Jewish, the series had several Christmas episodes, often exploring the holiday without even a hint of sentimentality or nostalgia. That alone makes these stand out from the norm.

I felt like the show held up well on a new viewing. While the jokes of course weren't as fresh as when I first heard them, most of them remain funny. The exceptions were Jerry's monologues, which came off more dated. But those weren't more than a few minutes of any episode, anyway.

If you're too young to have seen these, it might be worth checking out a few episodes. I didn't feel like any of the Christmas episodes were required holiday viewing (though a case could definitely be made for The Strike), but they're all good palate cleansers for the usual sappy Yuletide fare.

This episode revolves around an early Christmas present George buys Elaine as a thank you for getting him a job at her office. Only, in order to save money, he picks out a clearanced cashmere sweater containing a red dot. George then has a brief affair with the office cleaning lady, which leads him to lose the job.

Jerry has a plot line, as well, though it's more tagged on: he accidentally allows Elaine's boyfriend, a recovering alcoholic who already dislikes him, to take a cup containing vodka at an office Christmas party. This doesn't have much bearing on the plot, but it leads to an amusing finale when the three friends are hiding under a desk while he drags a Christmas tree through the office in a drunken rage.

I liked this one quite a bit. The jokes held up well, and the writers found a good middle ground where they managed to build outlandish, potentially embarrassing situations without making the experience unpleasant to watch.

The holiday elements were well integrated, but subtle enough to not annoy viewers feeling over-saturated by the season (I've been told some people have that problem this time of year).

While George is pining over his recent break-up with Susan, Jerry is starting a promising relationship with a model, who's coincidentally in an ad campaign for a Calvin Klein fragrance stolen from an idea Kramer had the previous year, the second side-plot he's involved in after taking a photo for Elaine's Christmas Card without making sure her blouse was buttoned up all the way.

The episode's Christmas elements are relatively sparse. Outside of Elaine's story, where the holidays are a plot point, there's nothing but set dressing to place the episode. However, they do make a point of including decorations in the diner and in the therapist's office.

The Pick is pretty good. The story lines are nicely woven together, and the pacing builds to satisfying conclusions. As usual, the characters' lives are a little worse at the end than the beginning, but they've made some peace with the situation. Not a lot, but some.

This one features the series's most blatant homage to Superman: Jerry is ecstatic that he's dating a woman named "Lois," finally allowing him to utter Superman quotes in everyday conversation. Only it turns out she works for someone he beat in a race in high school, due to inadvertently cheating. By threatening to fire Lois, her boss forces Jerry to race him, only to have history repeat.

These days, superhero homages are commonplace, but this felt pretty unique in the 90's. For one thing, they utilized some obscure references. For example, Jerry's contest with Lois's boss was highly reminiscent of Lex Luthor's first appearance, right down to his hair. There were plenty of obvious one-liners you'd get from watching the Donner movie, but it was the obscure stuff that made it genuinely nerdy.

Of course, none of that really had anything to do with Christmas. Fortunately, most of the B plots were more timely. Kramer, in particular, spent the episode working as a department store Santa until Elaine's boyfriend converted him to communism: if that doesn't say "Christmas," I don't know what does.

Except when it intersected the other two stories, both Elaine and George's plots were less interesting. The writing around Elaine's communist boyfriend was a little obnoxious: I realize this is comedy, but that's not what communists are like. Meanwhile, George's story line, where he pretended to be communist to meet women only to be sent to Cuba for work, felt a bit too random.

But the relationship with Lois and the race rank among my favorite moments from Seinfeld. I like this one quite a bit, despite its flaws.

This one revolves around Kramer helping to reopen an old movie theater with the help of Lloyd Braun, one of Elaine's ex-boyfriends who had a mental breakdown. As usual, things spiral out of control, largely due to Kramer's attempts to make Braun comfortable. The title refers to a brand of imported gum Lloyd shares and falsely believes Jerry likes. It's more of a side plot to George appearing mentally unstable as a series of misfortunes occur, mostly due to his own inability to let things go.

It took a while for this episode to pick to up momentum, but by the end I was laughing. George's predicament got progressively worse as the episode went on, and it turns out that makes for great comedy.

The Christmas elements in this one were mostly limited to background decorations and the occasional reference: they could have told the same story any time of the year without any major alterations.

Like The Gum, the holiday elements here were light, at best. There were enough background decorations to establish the setting, but it never really came up or influenced the plot. That said, I think I enjoyed this more than any of the others. The jokes landed often, and I found the episode hilarious.

The title refers to George's story, which follows his attempts to move into a better apartment in his building. He's been promised an open unit, but it's pulled away at the last minute and given to an elderly man who survived the sinking of the Andrea Doria, a cruise ship which sank in the 1950's. Towards the end of the episode, he challenges the man by going in front of the board with his own life story, consisting of events which have occurred over the course of the series. It's almost impossible not to laugh as they're moved to tears.

As good as that was, I actually think I liked Elaine's story more. After her blind date has to cancel due to being stabbed by an ex, she wants to find out what makes him so interesting. When they finally do go out together, she watches another ex-girlfriend of his throw hot coffee on him. She does some research, discovers he's bad at breaking up, and decides to call it off. When he insults her by suggesting she has a big head, she initially laughs it off, only to watch it roll into a sort of curse.

By the end of the episode, she brutally assaults him, and he winds up snatching George's apartment from under his nose.

Throughout all of this, Jerry forms an alliance with Newman in the hopes he'll be transferred to Hawaii, and Kramer's cough causes him to devolve into a dog. It's... funnier than I probably made it sound.

The Strike is from the series's last season, and it's by far the most remembered of the show's Christmas episodes. The name references Kramer's story in the episode: after being on strike from H&H Bagels for more than a decade, the union makes a deal, sending him back to work. Almost immediately, he goes back on strike, because he can't get Festivus off.

And that, of course, is why this one is remembered. We learn George's family celebrates the holiday of Festivus instead of Christmas. George, of course, hates the holiday, and for good reason: his father takes it extremely seriously. George spends the episode planning to skip the celebration, but when he's caught giving out fake donation cards in lieu of gifts at the office, the only excuse he can think of is that his religious heritage left him in fear of persecution. To prove it, he's forced to take his boss to his family's house to prove the holiday is real.

Meanwhile, Jerry has a new girlfriend, the Two-Face (and, to the show's credit, they name-check the Batman villain: this series was always good to us geeks). She's given the moniker due to the fact she looks gorgeous or ugly, depending on the light.

Elaine's plot line centers around a fake number she'd been giving out to men she had no intention of ever speaking to again. After she inadvertently gives someone a customer loyalty card she's almost finished, she tries to track him down, only to attract the attention of a pair of creepy men who work at the business her fake number leads to.

A series of coincidences bring everyone to the Festivus dinner, which is even more uncomfortable and humiliating than George expected.

While I like this one well enough, I don't think it deserves the status it's often awarded. It's certainly funny, but the premise is a little too extreme to work, an issue I recall having with a lot of the last season. One of the things Seinfeld did exceedingly well in its prime was convince the viewer to suspend their disbelief for some pretty outrageous scenarios, but they bit off more than they could chew this time.

Likewise, this one felt a touch mean-spirited, particularly towards the female characters. The Two-Face premise felt cruel, and the sequence at the end where Elaine was seated between two large men she was scared of was incredibly uncomfortable.

Still, the Festivus elements were great, and they certainly left a mark on popular culture. If you've never seen this before, it's probably worth tracking down for that fact alone.
90's Classic Comedy Episode Erin Snyder