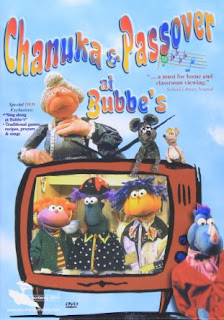 We came across a crappy-looking DVD titled, "Chanuka & Passover at Bubbe's" on a shelf of Chanukah (/Chanuka/Hanukkah) books at the local library and decided to throw ourselves on the grenade and save some poor kids from the experience. Naturally, we didn't bother watching the Passover section (we're Mainlining Christmas, not Mainlining Easter), but we sat through the forty-two minutes of low-rent puppetry constituting the Chanukah portion.

I should mention that this thing has neither a Wikipedia page nor an IMDB entry, though it seems to be up on YouTube (at least at the moment), and it has at least one fan. We're not 100% sure of the date - the end of the credits cites 1988, but we're not actually sure whether that's when it was released, aired, or finished.

Like a lot of children's entertainment, this is more premise than plot. It centers around two puppet children bringing their friend to their grandmother's for Chanukah. For reasons that are neither explained nor relevant, their grandmother runs a boarding house for animals - my best guess is that they had a bunch of animal puppets. None of this really impacts the plot, but that doesn't mean much; like I said before, there's really no plot to be impacted.

The only other significant characters are Bubbe and Anton. Bubbe is, of course, the grandmother, while Anton is a douche who thinks Chanukah traditions are dumb. Subtlety, folks. Subtlety.

To be fair, the puppets are better than you usually get in low-budget productions. Same goes for the song writing: there's nothing brilliant here, but they're nowhere near as cloying as you'd expect. However, the production values falter when it comes to the quality of both the puppetry and voice recording. While it's clear the people making this wanted to be Sesame Street, it's equally clear they didn't have a fraction of the skill.

There are a bunch of short sequences, usually punctuated with a song, building on the central themes. Most of the "story" (really can't use that word any looser) centers around Anton trying to break tradition and the kids' friend, Chester, torn between his heritage and his man-crush on Anton. For example, there's an extended section about Anton wanting to make tomato-latkes instead of potato ones.

Also, there's a required "true meaning of Chanukah" segment where all the characters are cast in a re-enactment of the uprising/oily miracle at the heart of the holiday. Anton, naturally, stands in for the Greek ruler.

In these scenes, the origin of Chanukah is warped to reflect modern themes: religious freedom and being oneself. That second part is also played up through the finale, when Chester rejects Anton's dismissal of tradition and embraces his religious identity.

And... I'm calling bullshit. Being yourself, in the context of this special, is entirely within the confines of religious and cultural tradition. The special bends over backward to mock characters who try to find their own sense of self outside of this context: Anton as he tries to explore new ideas and Chester as he tries to explore being something different (he tries dressing as a mouse and rhinoceros, which - let's just say this sets a poor example to establishing a unique identity). I'm not opposed to themes respecting traditions and cultural heritage, but there's something extremely disingenuous about trying to brand this as "being yourself."

Aside from its thematic hypocrisy, the special does a better job with its limited resources than, say, the Lamb Chop special we saw several years ago. But I still can't think of any reason to track this down. Well... maybe one: that oddly positive review I mentioned earlier has some interesting comparisons between some of the designs here and some later Simpsons characters (one of the puppeteers worked on both). But you're better off checking out the article and leaving this alone.
Comedy Erin Snyder Hanukkah Musical Puppet Sucks