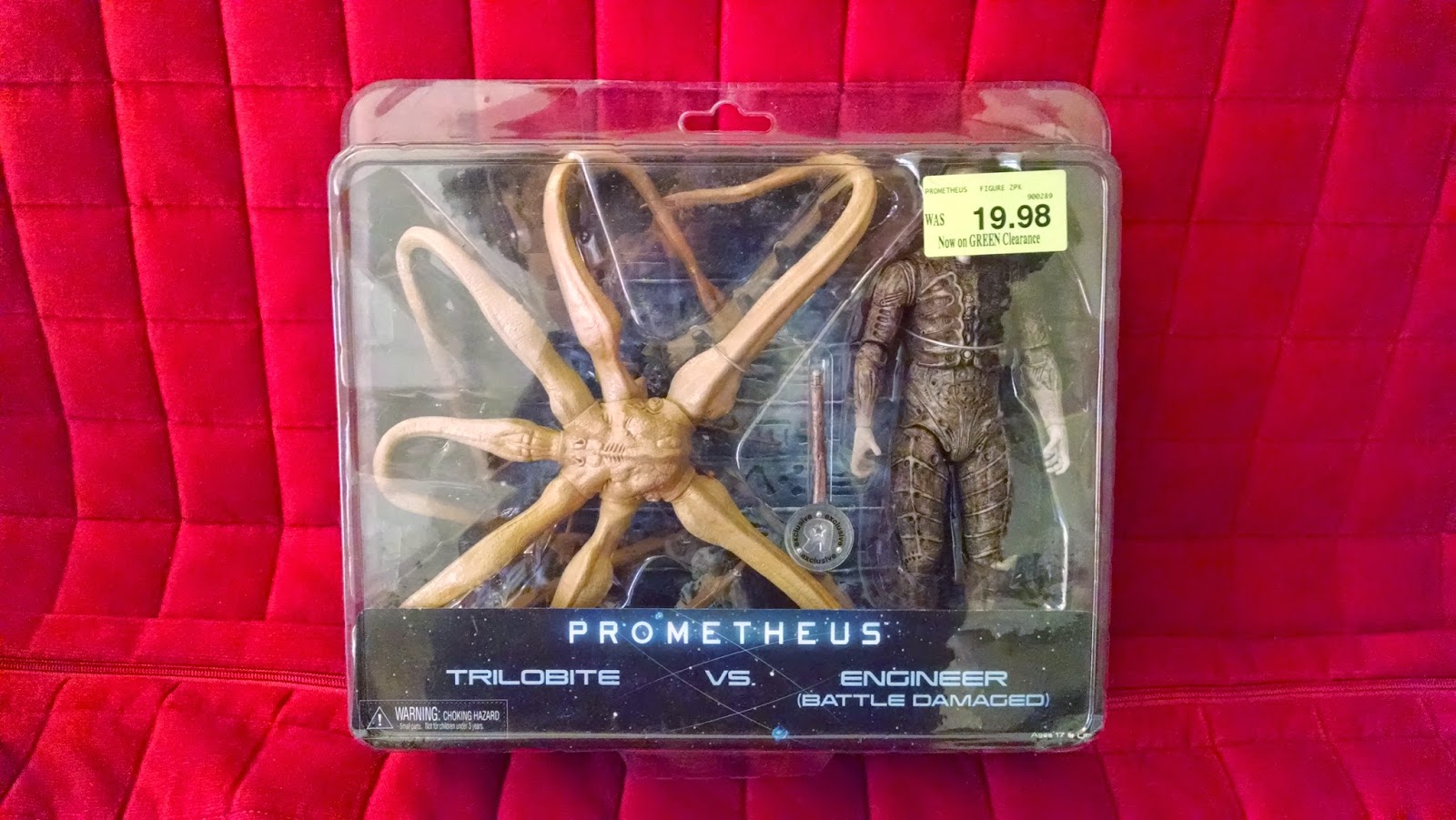 This is a little awkward. Despite the fact the toy I'm reviewing is a Toys 'R' Us Exclusive, it is absolutely arguable that some of the photographs of this toy could be considered NSFW. I doubt anyone will be that offended by the imagery, but I wanted to offer a warning upfront.

A while back, I explained why Prometheus should be considered a Christmas movie (short version: because it IS a Christmas movie). That was at the forefront of my mind when I came across the above 2-pack on clearance at Toys 'R' Us. I looked at the design of the "trilobite" and considered how it resembled the Star of Bethlehem, and how that was almost certainly intentional. I grabbed it, because, in its own twisted way, this is actually a piece of Christmas merchandise.

For the record, the $19.98 price tag is before the 60% discount was applied. I paid $5.99 for this, not a ha'penny more. The $20 was already a markdown: it started around $35, if I remember correctly. The takeaway from this is that very few people saw much point in buying it, despite the detailed sculpt and paint work.

The figures are made by NECA, one of the better collectible companies out there. In addition to this and other Prometheus figures, they've got a line of Alien/Aliens toys that are actually appealing to collectors.

Before we move on to the figures, I'd like to take a moment to consider the back of the package: 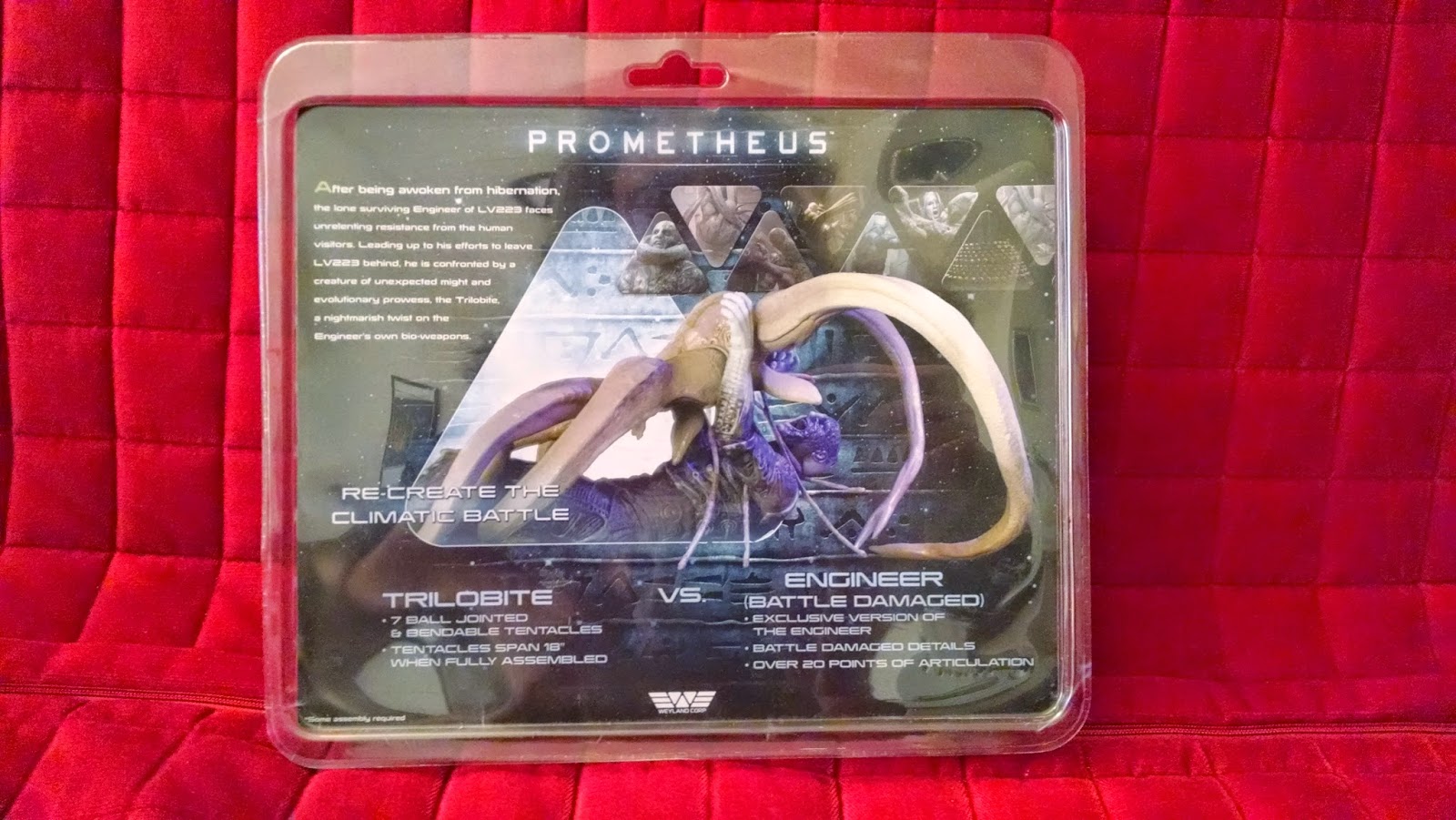 You get a brief summary of the events leading up to the recreated scene in the upper left corner, along with some selling points on the figures. You also get this sales pitch: 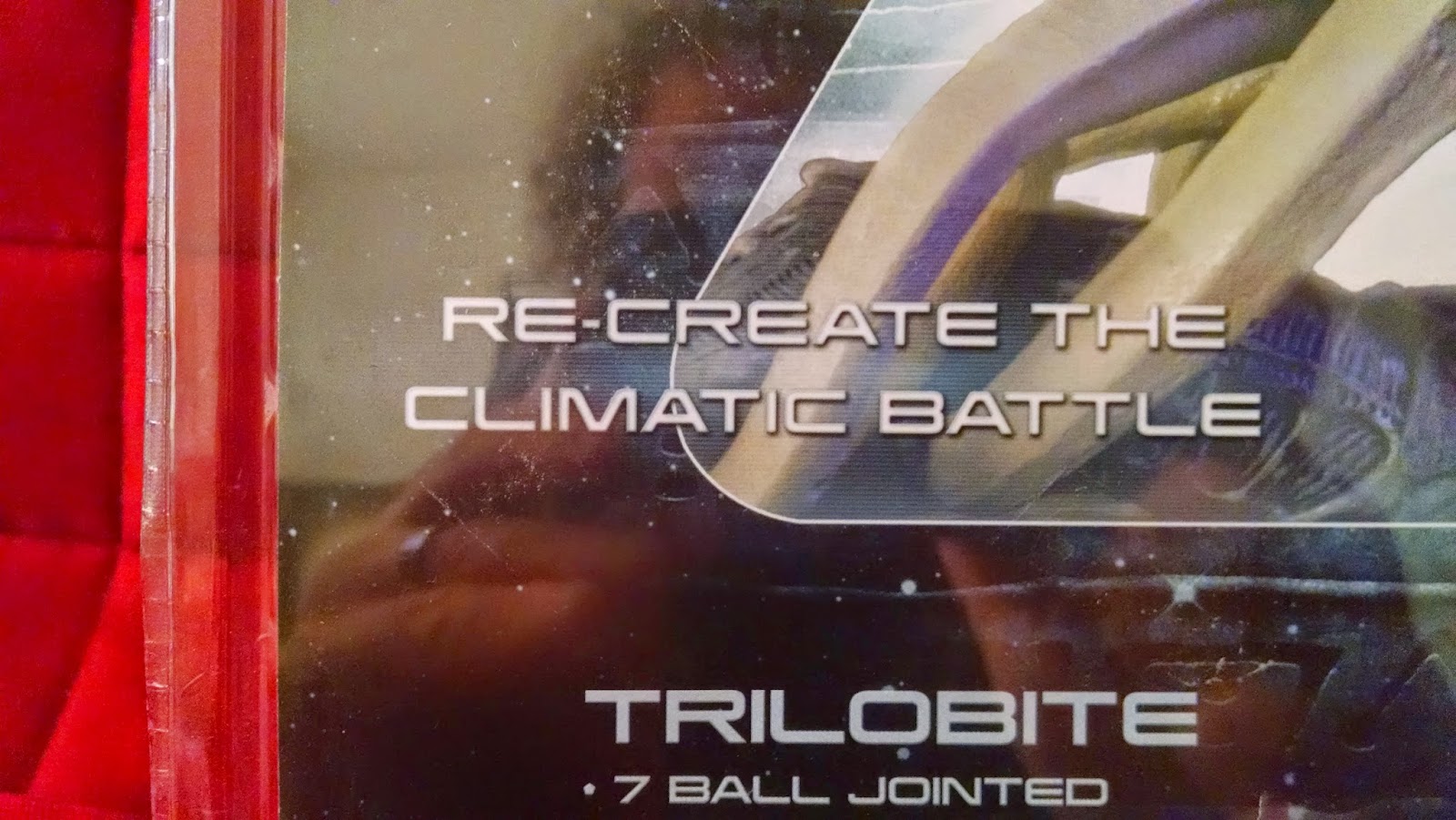 "Re-create the climatic battle." Er... thanks, but no thanks. I'm kind of disturbed NECA's marketing department thought there were people who'd be interested in doing so. 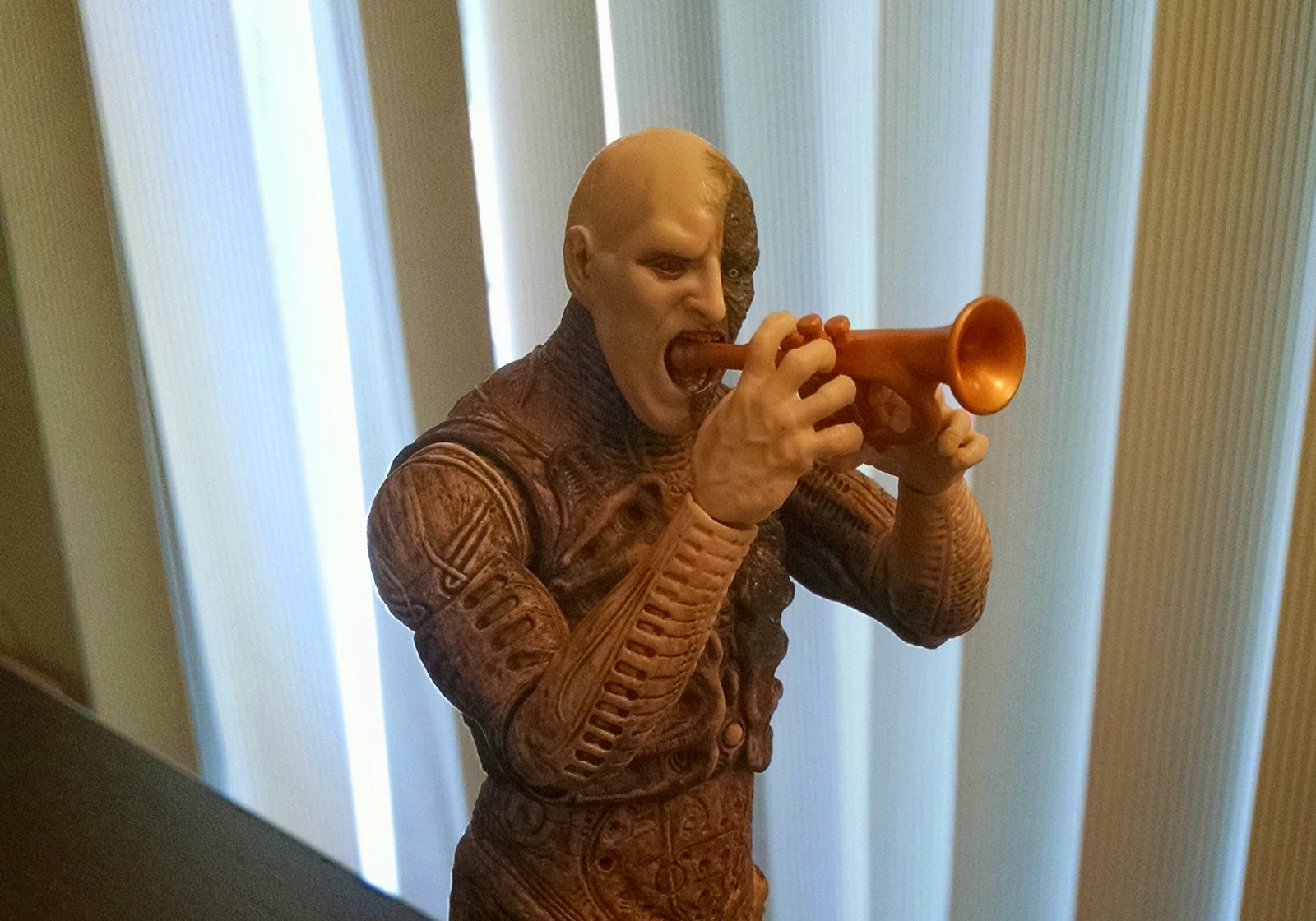 The battle-damaged Engineer is impressive, from an artistic and production standpoint. The sculpt is intricate, and the paint work brings out the detail. Oh: horn not included. 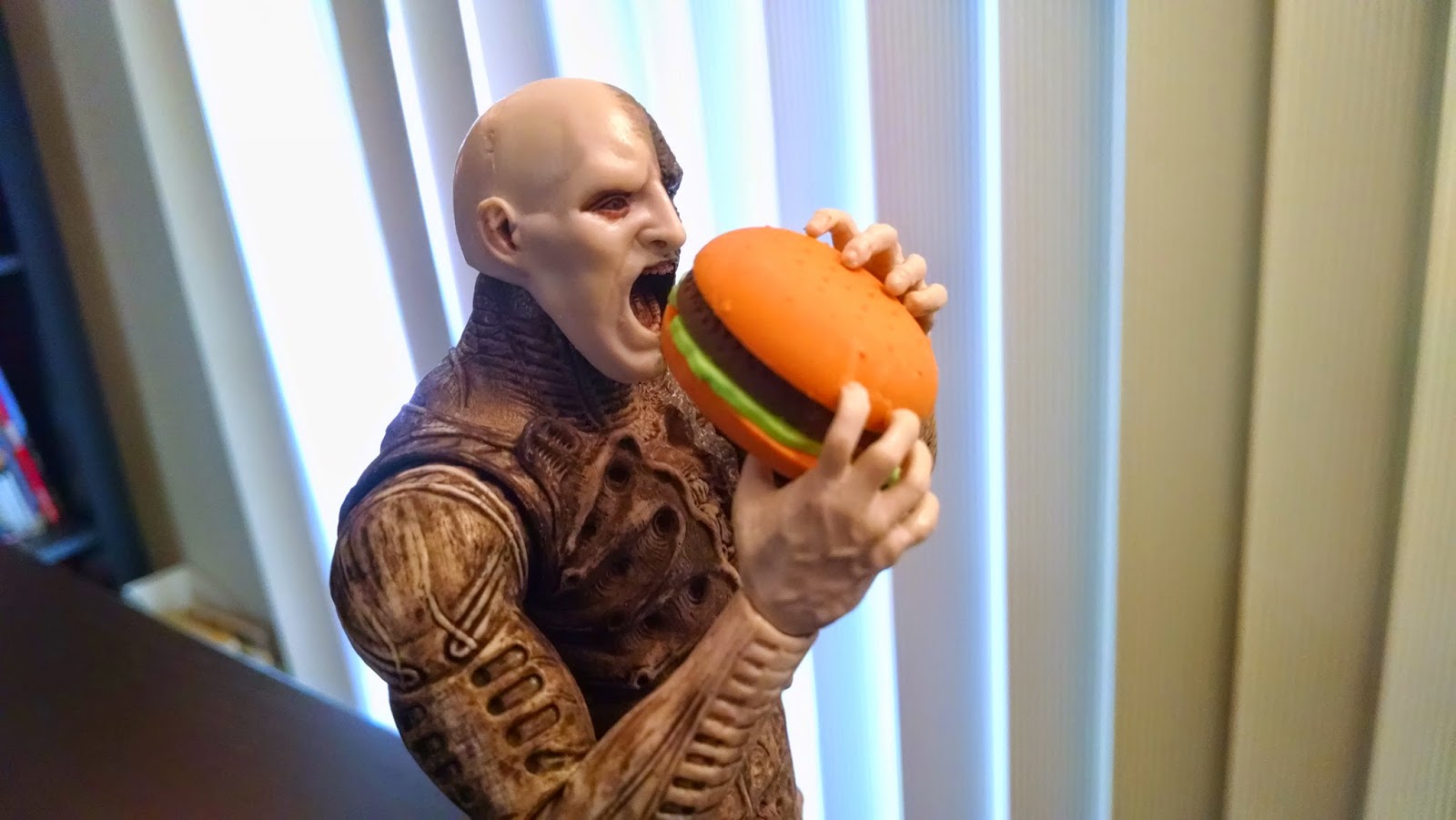 Burger not included either. 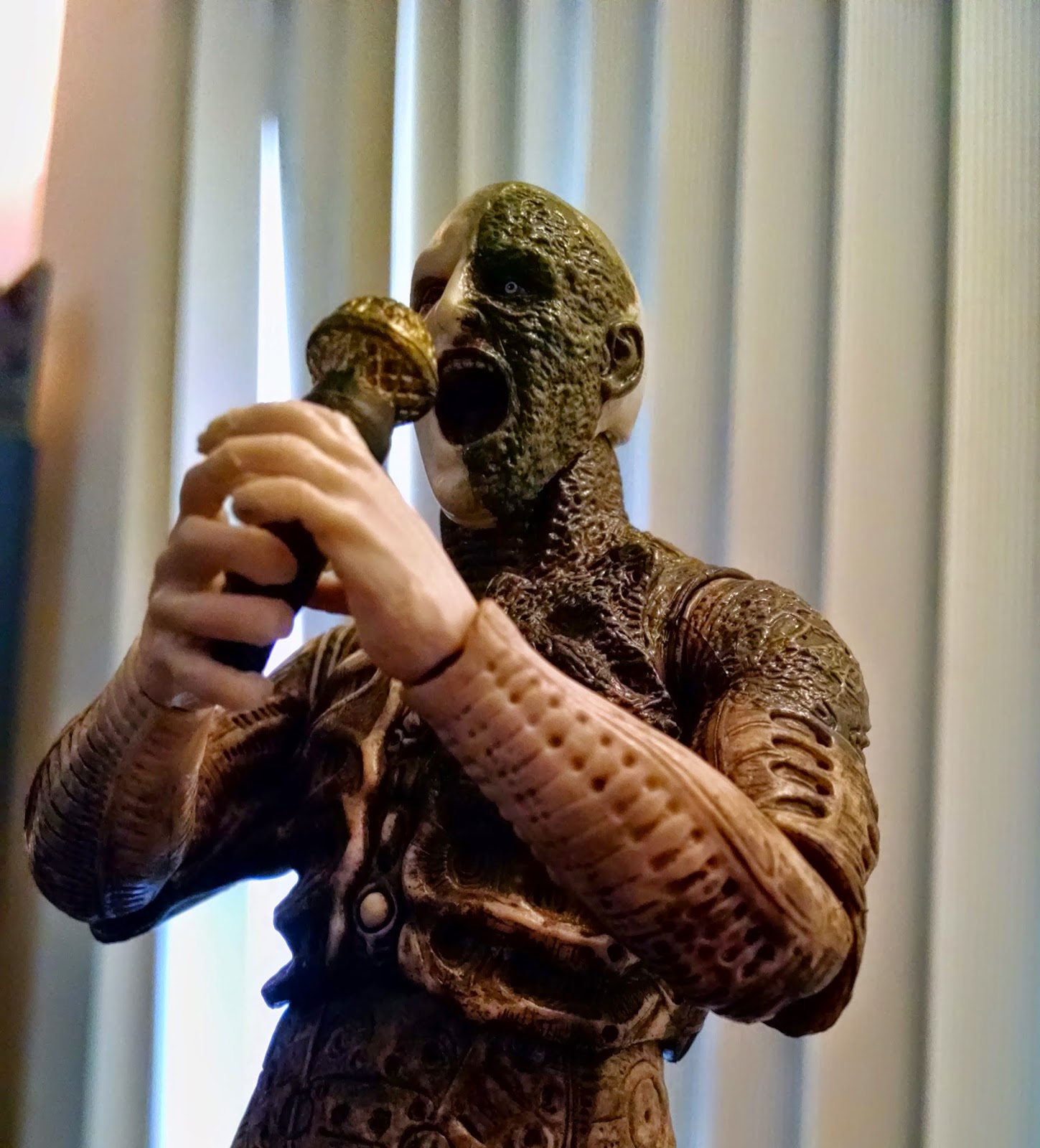 Same goes for the microphone. Pity - I feel like he needs it. 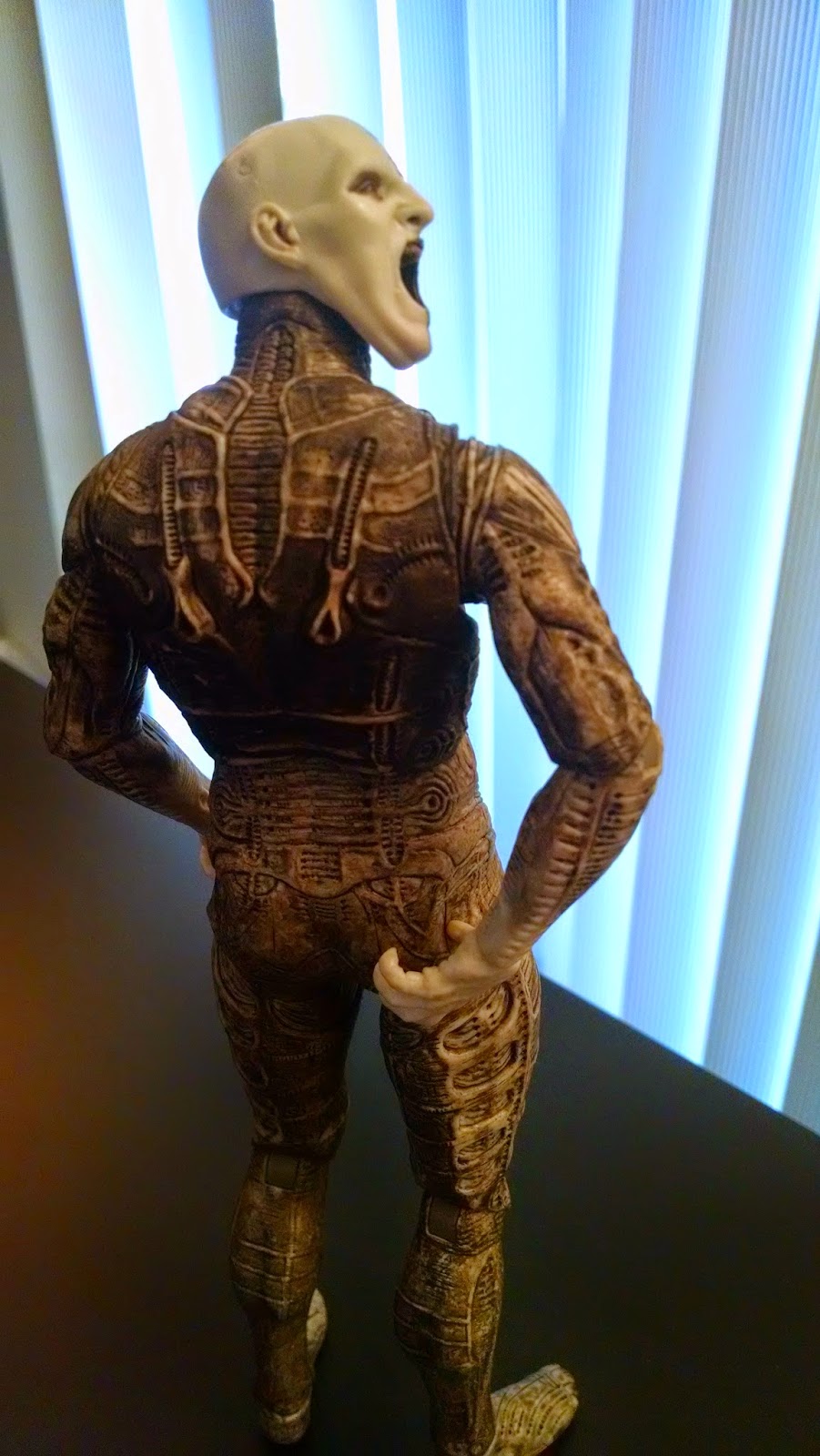 One odd note. The back of his lower torso is covered in a thin, detailed malleable plastic piece. It's sort of similar to rubber outfits that some larger figures are beginning to incorporate to cover up joints. This doesn't seem to offer much additional articulation, but it does mean he has a pinchable butt. To put this in context, I've been reviewing action figures for six years and collecting for more than decade, and I don't recall ever seeing this particular feature before. It seems like a missed opportunity that NECA neglected to advertise this on the back: it's far less bizarre than inviting people to play out the end of the movie. 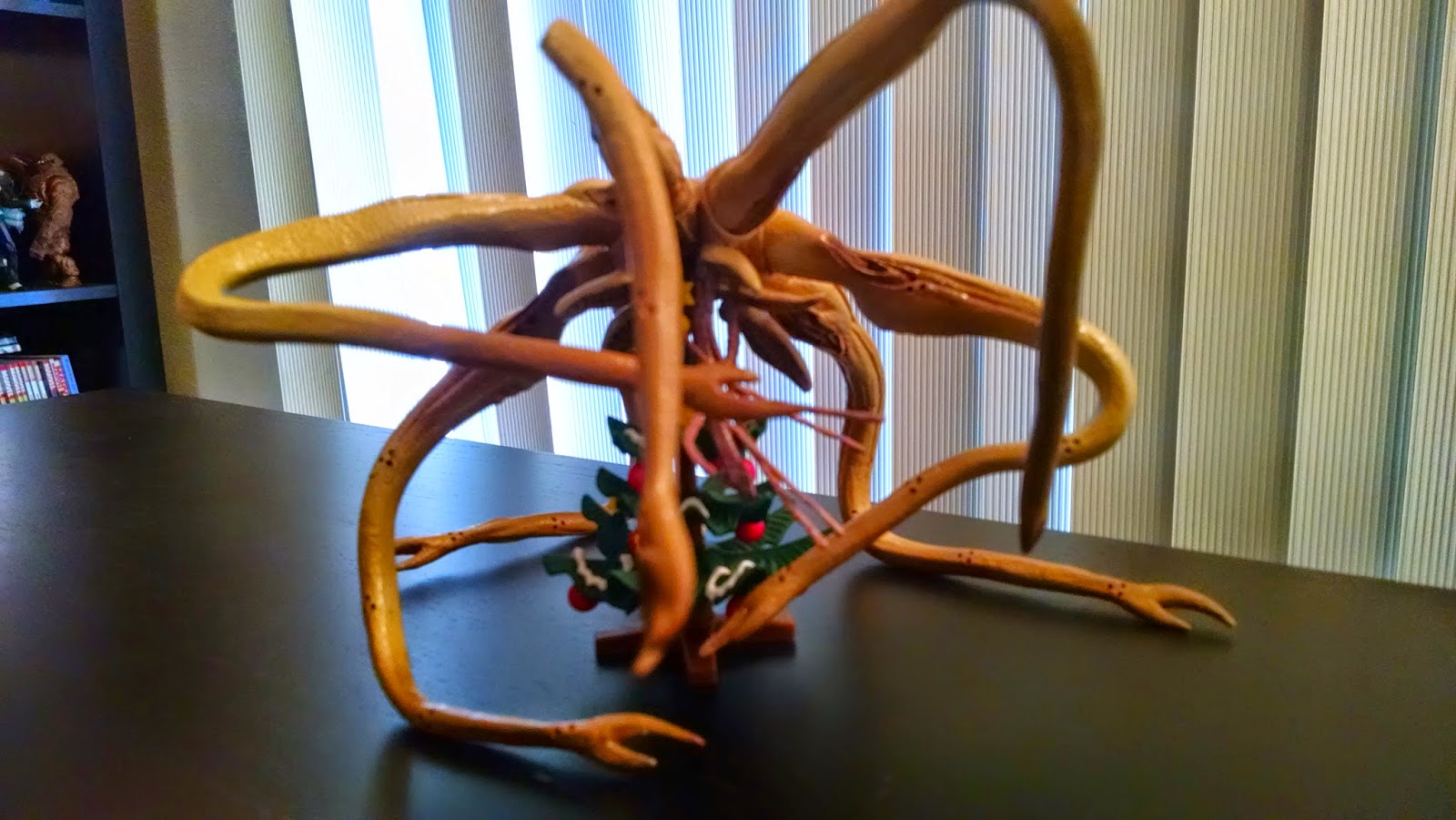 Let's move onto the Trilobite of Bethlehem. Tree not included, by the way.

The tentacles are all connected to the body by ball joints. In addition, they're flexible and have a wire skeleton. It also comes with a separate detachable piece that plugs in. Here's a picture: 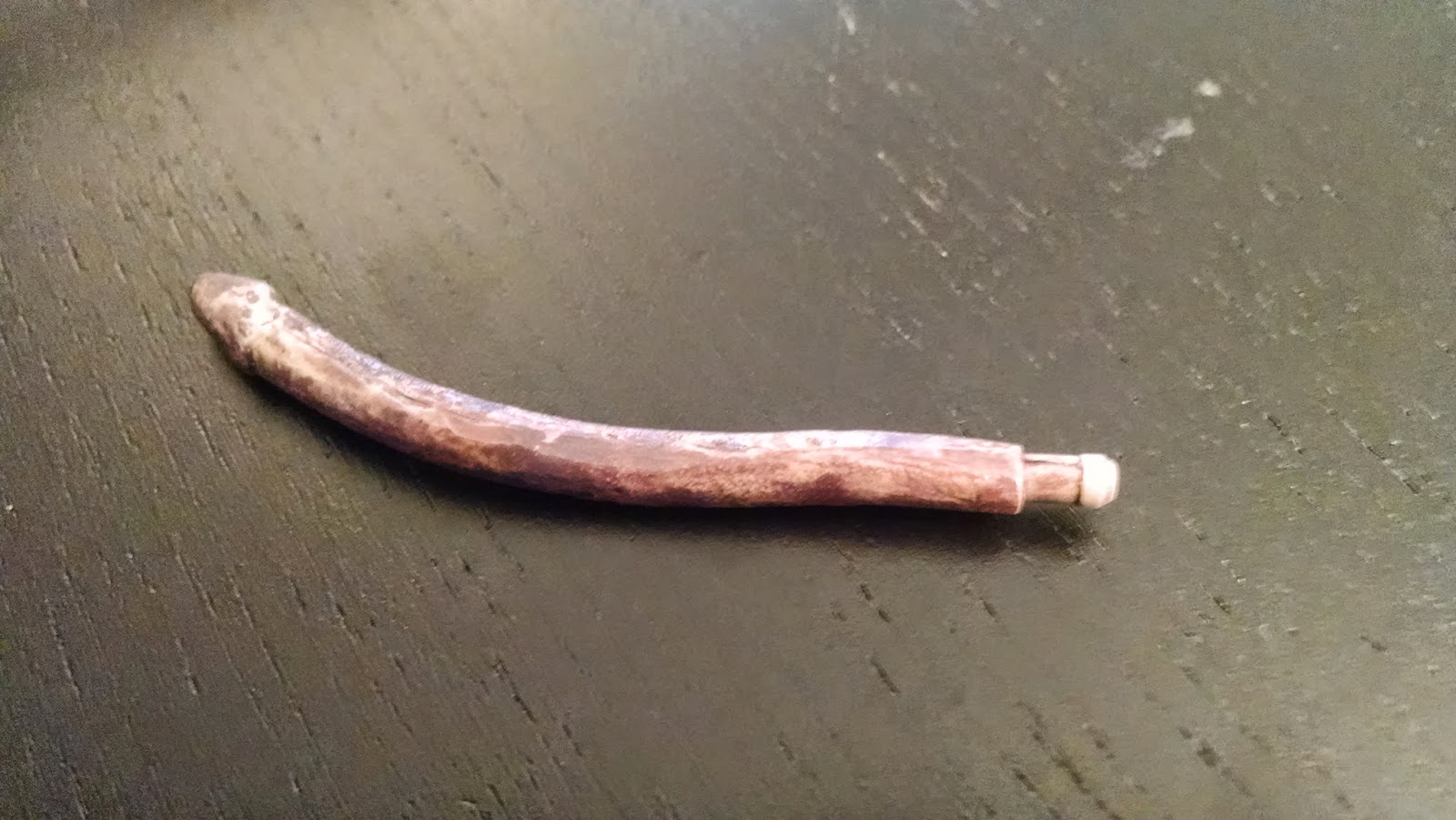 Sigh. The space squid penis is included. This is, of course, essential if you want to re-enact the "climatic battle" from the movie.

Did I mention I bought this at Toys 'R' Us? Just making sure. 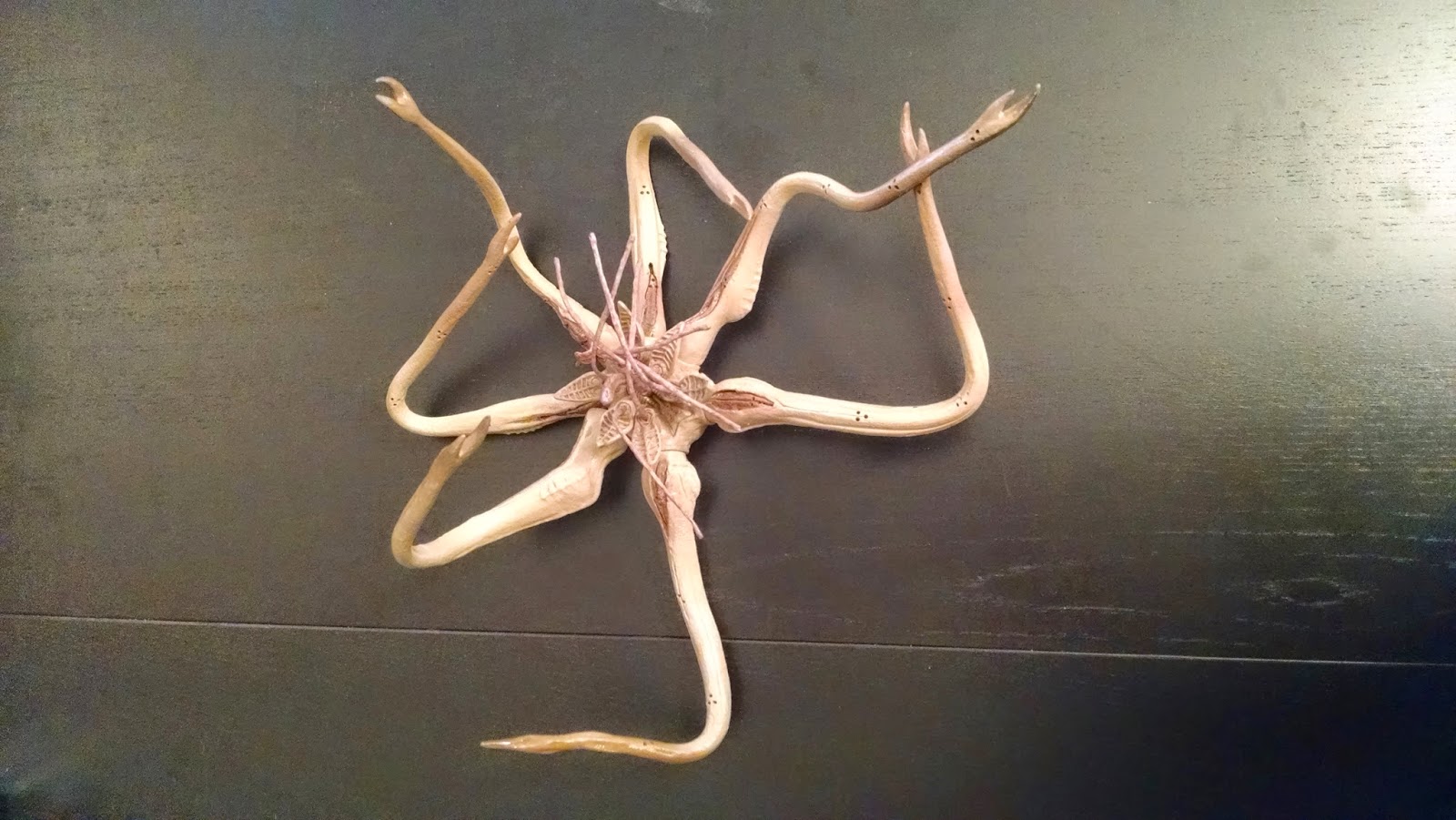 Rather than close this review with a picture re-enacting the scene, here's a photo of the Engineer with Two-Face. 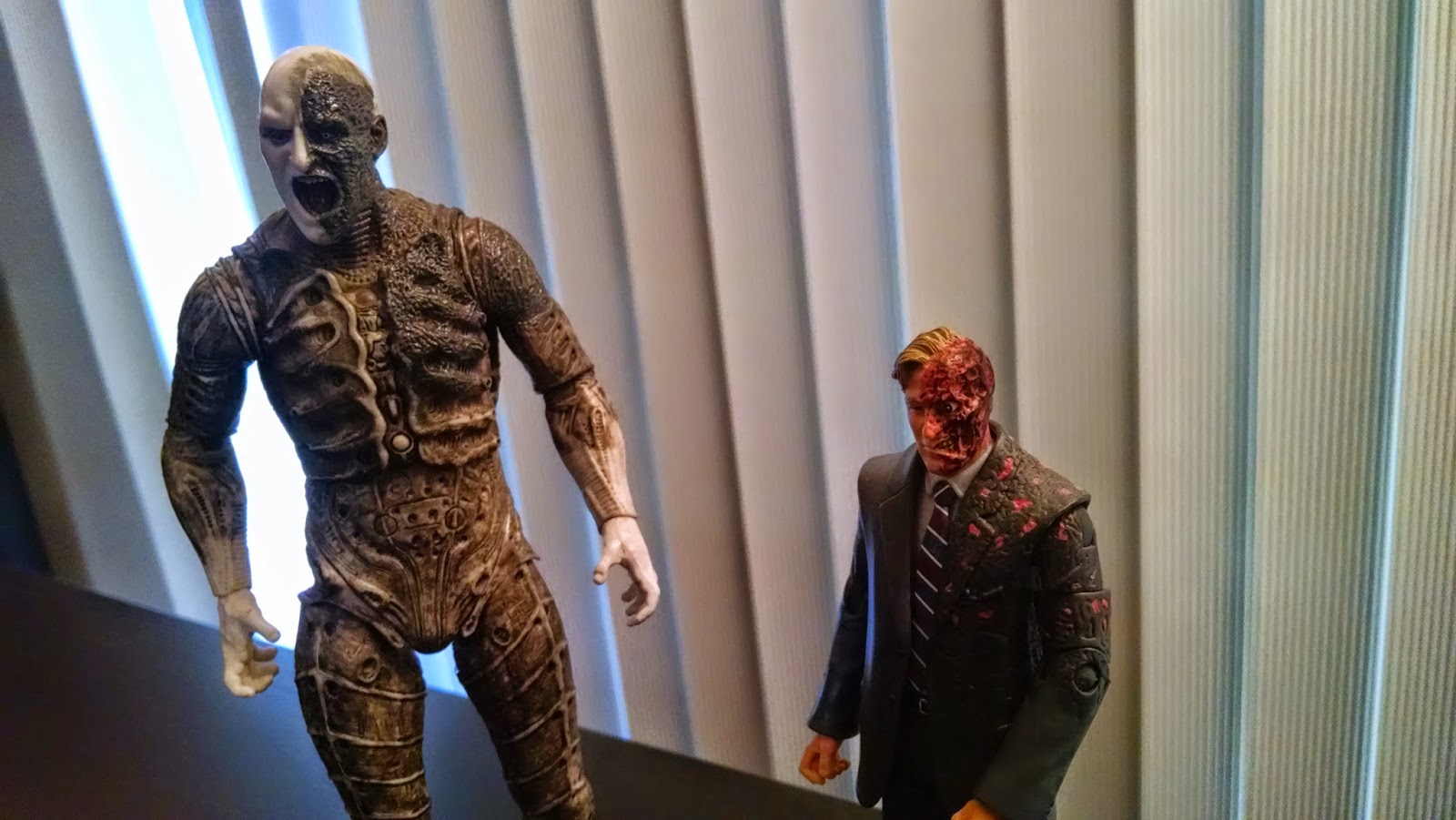