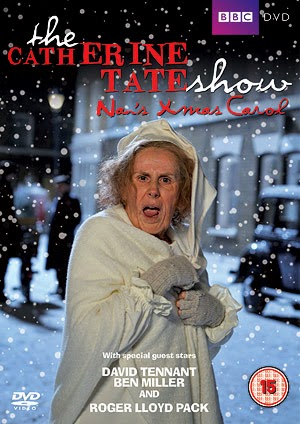 I’ve seen a few minutes of The Catherine Tate Show. It’s a sketch comedy show. I was not prepared for this.

Some explanation that I wish I’d had going into this: This special is one long story based on one of the recurring characters that Catherine Tate plays. This character is an abrasive, obnoxious grandmother. I suppose it’s funny to some people? It’s really not my style of humor.

Because it’s A Christmas Carol, we have to set up that Nan is a horrible person by having her be rude to carolers, steal from her neighbors, and toss relations come to stay with her out on the street. This takes entirely too long and is dull as dishwater.

FINALLY, we get to the ghosts. At this point the pace and the humor finally start to pick up. Marley’s place is taken by her late husband, and that scene made us both sit up and pay more attention. Then the Ghost of Christmas Past has a bit of trouble impressing Nan, and we started to laugh. Past brings Nan to her childhood and also shows her other Christmases from her life.

We learn that she didn’t lose her Christmas spirit, she’s always been an ungrateful, harping harridan, even at age six. Okay, that twist actually kind of works for me.

The Ghost of Christmas Present is played by David Tennant as a mincing up-to-the-minute hipster, and his scenes were fun as well. The Ghost of Christmas Future’s entrance was pretty funny. After seeing her bleak, lonely future, Nan does begin to regret her actions. This actually kind of works, because Catherine Tate is quite a good actress, and managed to sneak a bit of pathos in when we weren’t looking.

So then we’re treated to the requisite Christmas scenes of feasting and friendship and singing. Only, they really should have either recorded the singing (featuring ska band Madness) in the studio or pushed further the fact that it was being done live, thus full of mistakes and sound/mic errors. As it was, the middle ground just made it awkward to listen to.

Do I recommend this? It did get much better in the second half, but I wouldn't’ necessarily recommend it unless you’re already familiar with the character and want to watch that for a hour.

It is on Hulu for the season, and if you need to either drive off or determine the mettle of your relatives this holiday, you could try judging their reactions to this.
00's Comedy Episode Fantasy Lindsay Special