By Erin Snyder - December 17, 2014
When right-wing pundits rant about "The War on Christmas," there's one group they always leave out, and that's Christians who boycott the holiday due to its pagan roots and lack of Biblical origins. These groups are incredibly inconvenient for both sides of the holiday debate: the right wants to paint a picture where atheists are attacking Christmas, and non-Christians certainly don't want them as allies (these groups tend to be even more hell-fire and brimstone than the ones they're battling). But Christians who don't celebrate Christmas are a significant group - about 5% of Protestants fall into this category.

I'm going to be considerate to these people and say that Jim Staley's reasons shouldn't be considered representative for the larger group.

Staley is the pastor for "Passion for Truth Ministries." He seems to be trying to recreate a more primal version of Christianity inline with what its founders believed. This 2-hour video, available on Youtube for anyone foolish enough to want to see it, is focused on uncovering the pagan origins of Christmas and Easter and encouraging Christians to stop supporting the holidays.

While I'm coming from a dramatically different perspective, I'm certainly interested in the origins of Christmas traditions. Unfortunately, Staley's video has all the research standards of a 6th grade book report, and his conclusions are laughable. 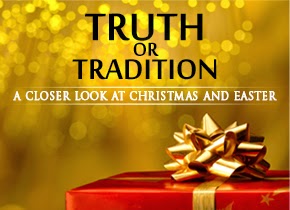 The video opens with a fairly standard intro, enticing the viewer to stick around. The voice-over starts making some bizarre claims almost immediately:

"Did you know the birthday of every Pagan sun god around the world was on December 25th? Did you know that Christmas was illegal in the United States until the mid-1800's?"

Both claims are repeated in the video itself. He provides some justification for the illegality of Christmas that offers some insight into his failings as a researcher. Yes, the Puritans made the holiday illegal in Massachusetts in the 1600's. Yes, it wasn't officially recognized as a state holiday until the 1830's. No, that certainly doesn't mean it was illegal to celebrate it anywhere in the United States between these two points. If he'd spent a little more time on Wikipedia, he'd have realized this certainly wasn't the case. I know he spent some time there, because he cited it as a source for at least one quote. Even worse, he quoted multiple encyclopedia sets.

If this had been shorter or if there were less videos attributed to him, I'd wonder if this wasn't some kind of elaborate joke. The number of factual errors were staggering. And these weren't minor details, either: the first half of the video was devoted to Easter and its Pagan origins. The centerpiece of his argument concerned the holiday's connection to the goddess Ishtar. He then went on to play connect-the-dots with numerous architectural designs, religious symbols, and iconic designs to demonstrate that it all tied back to Ishtar and her husband, and that every church steeple is really Baal's wiener (okay - that part was hilarious).

I'm assuming I don't have to debunk this. If anyone out there is under the misconception that Easter has jack to do with Ishtar, I recommend reading this article (or any other you find googling the two words).

There were other claims that were almost accurate or contained a kernel of truth, like when he claimed that Santa Claus was Odin (the Norse god was certainly one of several influences on the modern Santa, but equating one with the other is a gross oversimplification). He also plays a montage of clips of people dressed as the folkloric demon in order to drive home just how completely the holiday is in the hands of The Enemy. I feel bad characterizing his perspective on this as naive - after all, it's not hard to imagine how this looks from his perspective - but I feel like it's justified given his attempt to paint his arguments in an academic light.

The real punchline, as far as I'm concerned, comes when he explains how the devil operates: providing half-lies in order to poison and compromise the truth. One expects the irony is entirely lost the speaker.

Of course, if anyone wants to find pagan elements in Christmas and Easter, they don't need to look far. I certainly agree that modern Christmas is best understood as an evolving celebration that's been observed by humans for a very, very long time. Likewise, I don't fault him for choosing not to recognize the day (or to try, at least), but his "investigations" into the truth behind Christmas are ludicrously inaccurate.
2012 Documentary Erin Snyder Movie Religious Special