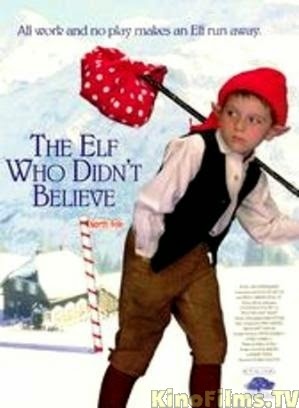 Well, here’s one for the list, ‘rightly consigned to the dustbin of history’.

Elmer is an elf, but he hates being an elf. It’s not that he’s bad at it, he’s just a complete slacker. Ladies and gentlemen, your protagonist. After a few painful scenes after which Elmer should have been summarily fired, he pulls out an Elf manual and discovers that he could become a real boy (just like Pinocchio?) by going to the human world, doing a good deed, and making a wish by noon on Christmas Eve.

He semi-accidentally sets off some high-tech gizmos on Santa’s sleigh, and the sleigh brings him to Plantville, USA.

Guess what’s in Plantville. Did you say a plant, boys and girls? You win more of this terrible film.

A plastics plant, the only thing in town, has recently shut down and the town is on edge. You’ll never know, though, because the characters are all either completely over the top caricatures or completely flat and uninteresting.

The villain who ran the plant is introduced randomly watching the skies on the lookout for the plot of the movie when Elmer roars into town. I honestly thought he was supposed to be a PI or something. Why was a high-powered industrialist out all by himself looking for UFOs? Once he sees the sleigh, he knows immediately what it is and how he’s going to use it to ruin Christmas, and proceeds to bully the bumbling mayor into helping him. The mayor and his bumbling cops think they’re capturing a very odd alien spacecraft.

There are more characters! Do you remember how sometimes some terrible person would write Lois Lane as a wannabe who got people into trouble more often than she actually followed stories? The creators of Rebecca Rollins sure do.

At 33 minutes in, we meet some more actual protagonists: the obligatory sick kid, this time a girl, and her distracted but well-meaning dad. She discovers Elmer hiding out in her playhouse and agrees to help him get his wish.

I have to mention here that the writing of this whole thing is incredibly clunky. There are ‘jokes’ that are just painful, or land dead on arrival with a thunk. There are references that make no sense coming from an elf or a child.

Meanwhile, Santa and the other elves have discovered that the sleigh is missing and tracked its location. The head elf offers to send in his new crack squad. Erin and I both perked up. Santa says no, he’ll handle it. We both groaned. Why would you introduce a black-ops elf squad and not use them? WHY?

So Santa, who looks as though he’s being devoured by his own hair, makes his way to Plantville, and proceeds to skulk around and do very little, except deliver a little girl into harms way, not stay to help her, and then bring the adults on the scene.

Oh, I forgot. The local cops and the mayor abduct Elmer. Abduct a small person WHO LOOKS LIKE A CHILD and then take a picture of him bound and gagged. Other events intrude before anyone can really ask whether this is really a good idea.

After some poorly shot and edited chase scenes, everyone rescues Elmer and the sleigh, and he gets to distribute toys to more sick kids, so I guess that counts as a good deed. At the last minute, he decides to remain an elf so that he can use his celebrity to get his friend faster medical treatment. Screw all those kids who didn’t have an elf land in their backyard, I guess.

This film wants to be a farce, but instead it’s just a mess that could have been directed and edited better by a team of first-graders. Happily, everyone seems to know this. It has no wikipedia page. It has no reviews on Rotten Tomatoes, not even viewer reviews.

The only positive thing I have to say about this catastrophe of a ‘film’, is that the sound balance was terrible, occasionally saving us from having to hear what the actors were saying.
90's Comedy Lindsay Movie Sucks