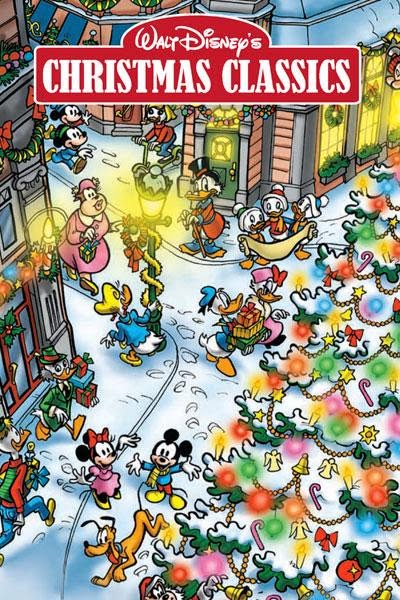 Well, nuts. I was looking forward to this one, because I’ve had good luck with classic Disney comics in the past. Unfortunately, this book is a real mixed lot.

This collection contains 9 stories, ranging from just 2 pages to 8-16 each. The best one by far is “Santa’s Stormy Visit”, a Donald Duck story by Carl Barks. This story from 1946 follows the misadventures of Donald as he tries to give his nephews a nice Christmas, although they’re living in a lighthouse and can’t get to shore in time to buy presents. It’s funny and sweet.

Also notable is “Christmas on Bear Mountain”, another Carl Barks story from 1947. This story is historically important as the first appearance of Scrooge McDuck. Scrooge decides to test Donald’s bravery by letting him use a cabin for Christmas that he claims is in bear country, while he plans to dress up as a bear to scare them. However, in the meantime, actual bears get into the house, and Scrooge ends up convinced that Donald is fearless. It’s okay, but not actually that clever or amusing.

On average, all of the Donald Duck stories are better than the Mickey Mouse ones. There’s just something about the tone of the characterizations that seems odd to me. This book also inexplicably contains one story from the 90’s: “It’s a Wonderful Christmas Story”. Pete plays a series of tricks on Mickey when he’s already down on his luck, and it gets kind of dark. Pete feels bad and ends up making it up to him… which is just plain weird. Why go that route and turn back? What is the point of this story?

The production quality of this collection isn’t awesome either. The paper quality is minimal and the cover seems to be damaged quite easily.

The Donald Duck stories are enjoyable, especially anything by Carl Barks, but I’ve seen better examples, so I can’t really recommend this collection, especially now that there are much nicer collections of Barks’ work.
40's Book Lindsay