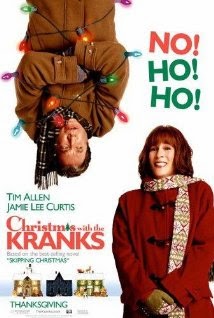 At 5% Fresh, Rotten Tomatoes underrates this movie. Based on similar films, I'd have expected 7% - perhaps even 8% - positive; not 5%. Critics seem to have punished this movie more harshly than it deserves on account of its horribly disgusting message, along with the fact that it does, in fact, suck.

But these things all come down to magnitude. Christmas with the Kranks sucks less, not more, than Surviving Christmas, which is far overrated at 7% fresh. If I were the Kranks' two-bit hack of a director, Joe Roth, I'd be angry at this injustice.

Let's back up a bit. The movie stars Tim Allen and Jamie Lee Curtis as a couple who decide to skip Christmas. It's based on a book called, "Skipping Christmas." Why the title change? Because it was released the same year as Surviving Christmas, and the names were too similar.

Once again, the Universe is a cold and unfair place for Joe Roth. Of course, "Skipping Christmas" is a shitty title, too, so it's not like that hurt the movie.

They're skipping Christmas because their 23 year-old daughter is going to be in South America, and they decide to spend their money on a cruise. The first half of the movie follows the couple's misadventures as their neighbors harass them mercilessly about their perfectly reasonable request to be left alone.

This section actually contains a few decent jokes, mostly thanks to horror elements injected into the story. The neighborhood starts to grow ominous and dark as their so-called friends turn on them in an attempt to force them to participate. The movie never takes this idea quite far enough. Whenever it feels like it might touch on satire, the narrative takes a hard 180 and descends into bad slapstick. And when I say bad, I mean crap below Tim Allen's usual level of quality.

The movie's twist comes when they receive a call from their daughter: she's flying back to spend Christmas with her family after all. After a failed attempt to salvage the holiday themselves, the Kranks wind up accepting help from their neighbors who come to rescue. The narrative is restructured to make the Kranks come off looking selfish for trying to live their own lives. This point isn't subtly delivered, either: the movie makes it crystal clear that the neighbors were the good guys, while the Kranks were the villains.

The fact there was anything funny in the movie sets this just above Surviving Christmas, Deck the Halls, and a host of other holiday movies slightly more awful than Christmas with the Kranks. Make no mistake, though: this is still an abomination that no one should have to sit through.
00's Comedy Erin Snyder Movie Sucks