The Liberace Show: The Christmas Show (1954) 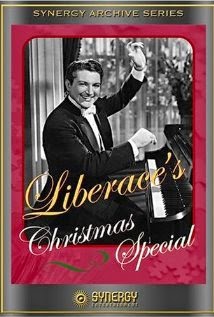 Background information on this episode is hard to come by. Wikipedia has some notes on the series on the article about Liberace, but the show doesn't even have its own page. IMDB fares a little better, though not much. We're not actually sure if the year for this is correct - IMDB has it for 1953, but the stamp at the end of the version we saw said '54.

It's not difficult to understand why: very little of what we saw qualifies as memorable. Mostly, it was just Liberace playing the piano. Sometimes he was joined by other musicians. He didn't choose particularly interesting pieces, either, though some of the medleys were fun. But I definitely could have lived without listening to his generic rendition of "White Christmas." Come on - that was already cliche in 1954.

The episode played like a stage show, interspersed with the occasional camera trick. But most of the "effects" were theatrical in nature. The background would light up to display a fake winter wonderland on command. It would start snowing when required. Things like that.

Early on, Liberace promised an appearance by Santa Claus. This occurred at the end when his family arrived to celebrate. His extended family, mind you: the set was getting crowded. Liberace's brother played Claus, a fact highlighted by Liberace, who teased him on the resemblance. That seems to have been the gimmick to this show: Liberace tried to pull the audience into the joke to win their support, even when the joke was really crappy and - in this case - the Santa suit was bargain-basement quality.

This was more style than substance... and even the style was kind of thin. To be fair, it was clearly an artifact of another era in television, when performers were still figuring out the medium, how it related to stage, and how it stood out as a unique form of entertainment. And Liberace's joy is somewhat infectious: the man was clearly a master entertainer. But the show's lack of narrative or originality make it tedious for those of us who are more familiar with entertainment that's actually entertaining.

It didn't help that this was 26 minutes long, which seems to make it double-length: the normal episodes were a lean 15 minutes. That would have been much easier to stomach.
50's Episode Erin Snyder Musical Variety