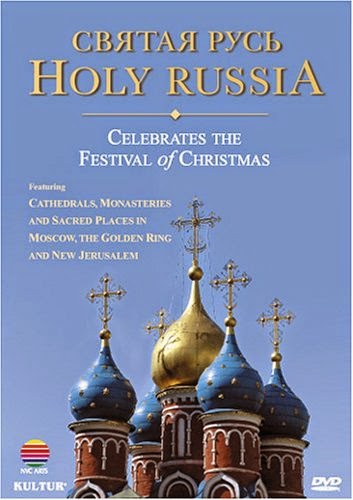 Snowy winterscape. Christmas music. Shot of a cathedral. Repeat for an hour.

Neither Lindsay nor I recall adding this to our Netflix queue, but somehow it got on there. Maybe it just migrated its way on or something. It's difficult to imagine either of us intentionally putting it there. Regardless, it arrived at our home, so we watched it.

It was, first and foremost, kind of boring.

It wasn't bad, of course. It just wasn't anything more than what it was. And what it was can be accurately described in the fragment-filled opening paragraph of this review. There was essentially no substance - it was music and video; that's all.

For what it's worth, the music was good. Though the subtitles were pretty awful. "Wast"? Really? And here I always thought the past tense of "was" was "was".

The video was good, by which I mean it was pretty. Lots of snowy streets, trees covered in snow, frozen lakes that were coated in snow, churches adorned with freshly fallen snow.... Basically, Russia gets a lot of snow in the winter.

The interior shots of churches and cathedrals were cool, though I'd have loved some info on their creation. The decorations were gorgeous, though, as was the architecture. The art was... well... some of it was fantastic, and some was a little odd. There were a few paintings (I'm assuming very old ones) depicting Christ and Mary that made one or both of them look like inhuman monstrosities. Which, honestly, would improve this whole nativity thing immensely. Like get Hollywood on that version ASAP.

Ultimately, this would work best as background. Say, something to put on during the world's least interesting party. Or as something quite to play around the holidays: I suppose it would work for that, too. Though Lindsay described this as one very small step up from a Yule-log fireplace video, and I find myself in agreement.

Still, if this sounds like something you'd be interested in, I suspect your local library has this in stock. Either that or buy some ZzzQuil. Probably just as good.
Erin Snyder Movie Music