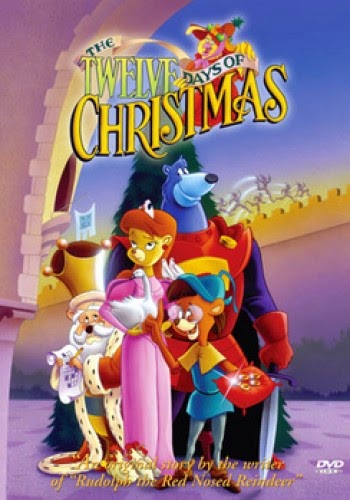 Background information on this special is sparse. It's an animated half-hour story providing a fictitious origin for the song of the same name. It features Phil Hartman, though he's warping his voice to a degree I couldn't even tell which character he was playing (not surprisingly, it's the lead).

This is narrated by a partridge and concerns four named characters: King and Princess Silverbell, Sir Carolboomer, and his squire, Hollyberry. If you read those names and thought to yourself they were hilarious, I've got some good news for you: there's a special floating around Youtube you're going to love. Unfortunately, I've got some bad news for you, too: there's almost certainly a two-foot spike sticking out of your forehead that's impairing normal cognitive function. Seek immediate medical help (after watching the special, of course).

The plot is thin to a degree that the very term "plot" is a generous overstatement. The special starts with Carolboomer wanting Silverbell's hand in marriage, but he's thwarted by the fact she's not remotely interested. Unbeknownst to him, she's really looking for a man who can make her laugh: humor is literally presented as the sole thing she lacks and desires. But since Christmas is coming up, he decides his best bet is to steal her Christmas list and provide her with the gifts she's looking for. He sends his zany squire, Hollyberry, to perform this task. However, Hollyberry winds up accidentally stealing the answers to a crossword puzzle the king's working on.

The vast majority of this thing's run time is devoted to a series of mishaps as Hollyberry - CHRIST, I HATE THESE NAMES - gathers the item and presents it to the princess, who becomes increasingly more frustrated with their inanity. Carolboomer just decides she's playing hard to get and sends the squire back out the next day to undergo more torment.

If I'd been writing this, I'd have concluded this by... no, wait. Actually, if I'd have been writing this, I'd have decided I didn't want to be a writer that badly and quit rather than allow my name to be associated with something this devoid of substance. But I'd have expected my replacement to resolve this by having the princess learn about the mix-up and find the whole thing so funny, she falls in love with the squire.

That would at least resolve the crappy premise and arc rationally. Instead, they just kind of have her start coming around to Hollyberry's antics around day nine or ten, then decide to marry him on day twelve. In other words, they went with a resolution more or less unrelated to the preceding 20 minutes.

So not only was it boring and humorless, it was utterly pointless. It's not worth your time. Hell, reading this review probably wasn't worth your time, and that took a fraction as long as sitting through the cartoon. Also, the animation was probably better.