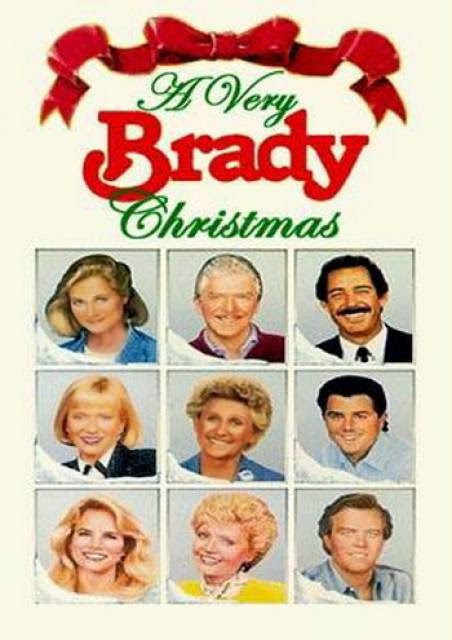 I haven't seen very many episodes of The Brady Bunch, but from the little I remember, A Very Brady Christmas managed to capture the stone and style of the show perfectly. Incidentally, I believe the previous sentence ranks among the all-time most condemning insults I've ever lobbed in a review for this blog.

It should be noted that this was produced in 1988, which was about nineteen years after the series had started. By this time, the Bradys had actually expanded into something of a cinematic Universe. Most of the kids had gotten married in earlier reunions and spin-off series, opening up a whole new generation of cloying Brady children.

The best description for the plot is that of a blender. What little story exists does so in brief, unrelated chunks. The impetus for the reunion revolves around Mike and Carol Brady trying to surprise each other with a Christmas vacation. The special sets this up as a potential major plot point, before defusing the tension in a scene about thirty minutes in. They run into each other at the travel agency and quickly decide what they really want to do is fly their kids' families home for Christmas.

Almost all of the kids have a secret. One is separating from her husband (who comes with her to the holiday party for reasons that don't begin to make sense). Another has dropped out of college to become a race car driver. One is ashamed his girlfriend is his boss and makes more money than he does (she comes along, as well, instead of doing something rational like firing him to solve the problem then dumping him, because he's an asshole). Another's husband just lost his job. The youngest is bothered that she's still treated like a kid. That just leaves one more of the boys, the only one without a real secret. His wife skipped the reunion to spend the holidays with her family, so they try to ratchet some drama out of that.

Oh, and if you care, Alice's husband just left her for someone younger. Of course, he comes back at the end, and she forgives him. Not sure why, honestly.

Everyone else's problems evaporate about as quickly. For the most part, all it takes is a brief conversation or an admission that something was off. A few platitudes later, and everything's fine. Mike and Carol accept their son drives race cars. The separating couple decide they don't really have emotional scarring or complex feelings. And so on and so forth.

Mike and Carol's problem concerns a mutual business acquaintance. Carol sold him some land, and - at her advice - he hired Mike to design a building. He's angry Mike wants him to invest in safety measures above what the law requires, and he tries blackmailing Carol into getting him to relax. He fires Mike and hires someone else. Then, while the family is getting ready to eat Christmas dinner, Mike's called away because the building has collapsed and a few security guards are trapped.

Keep in mind, all of this - the firing, the rehiring, the redesigns, any approval process, the altered construction, the building, and the accident - occur in the process of a few days. Oh, and Mike's an architect, not a structural engineer. Regardless, he goes to the location and heroes up. He tells the owner to dig a few trenches to relieve pressure, then he goes in to free the guards. He gets them out but somehow gets trapped himself.

If you were hoping the producers of this thing had grown a pair and were willing to kill off the patriarch of the Brady family in an act of self-sacrifice, you're giving them far too much credit. Instead, the whole Brady clan shows up. There's a flashback to an old Brady Christmas episode where Carol sang, and - in the present - she starts singing. Everyone, extras included, joins in.

This actually could have had a little impact - just a little - if they'd just worked that flashback into an earlier scene. But by placing it here, it comes off as hilariously and obviously manipulative. When Mike stumbled out, I didn't know whether to laugh or start hitting my head against the wall.

This was awful. Just awful. It was sort of a dramedy utterly lacking any tension or anything remotely funny. It just sputtered along for a few hours, a bunch of character sung, and everything ended happily ever after.

Worse yet, it reminded us that there are more Brady Christmas specials out there.
80's Comedy Dramedy Erin Snyder Music Sucks