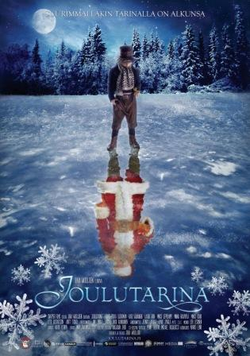 I'm going with the original Finnish name, Joulutarina, over the title for the US release, Christmas Story, because there are already too many damn movies with that name. Unfortunately, it'd be more accurate to say I watched Christmas Story: the official DVD doesn't have a goddamned subtitled version, forcing us to watch it dubbed in English. Fortunately, this movie is more visual than anything else, minimizing the damage done. Still, it was extremely obnoxious, and I feel like I missed a large portion of the performances.

This thing is intended as an origin story for the Santa myth. Of course, like most Santa origins, it's not remotely based in any of the legend's diverse historical roots. It is, however, quite reminiscent of the Rankin/Bass specials, which is better more than I can say for some interpretations. This Nikolas is an orphaned boy in Lapland. The exact time is intentionally left ambiguous, but the clothing and elements of technology were relatively recent (it looked a lot like the 1800's to me).

Regardless, the boy is adopted by his village after his parents and baby sister fall through an icy lake on Christmas Eve. Since no one in the village can afford to raise him indefinitely, they decide to pass him off from family to family every year on Christmas (I guess no one thought of setting up a tax or collection to reimburse the family taking him in so they could just adopt him). For some reason, Nikolas is grateful for this idiocy, so he gets into the habit of making the families' kids toys every year.

This bizarre pattern is broken when the village falls on even harder times. They hand him over to a cruel carpenter, who wants to exploit Nikolas's woodworking skill. To the movie's credit, they handle the character well: even before Nikolas's generosity thaws out his icy heart, he's portrayed as a competent woodworker with a lot to teach the Santa-in-training. Needless to say, when the following Christmas rolls around, the formerly bastardly carpenter adopts Nikolas and treats him like a son. All of this is cliched and obvious, but - like I said - surprisingly well handled.

This character makes an exit about 2/3rds of the way through. Around this time, they introduce the daughter of one of Nikolas's old friends. She becomes friends with Nikolas and becomes his helper. Eventually, he becomes too old, and the movie strongly implies that he's going to hand off the legacy to her, since it's a plot point that the true identity of the person making and delivering gifts is irrelevant. There was a brief period when Lindsay and I were both convinced they were going to subvert the "Mrs. Claus" trope by turning this character into a female Santa Claus. It's really where the movie was pointed in both plot and theme.

But they pissed all over that with a cliched shot of Nikolas, thought to be dead, swooping down on a flying sleigh at the end to wish everyone a Merry Christmas. I can't easily convey how out of left field this was: not only had magic not appeared prior to this point, several supernatural elements of the Santa myth were outright dismissed as childish inventions.

In all fairness, this was ultimately a kid's movie, so it's hard to blame the film makers for wanting a crowd pleasing finale. Still, it felt like a cheat. The movie was heading in a much more interesting direction.

Visually, the movie was stunning. They shot part of this on location in Lapland in winter, a fact which makes the making-of documentary more interesting than the movie itself (it doesn't hurt that the documentary is presented subtitled, allowing us a few brief glimpses into what the actors sounded like when acting). The sets are gorgeous. The wood shop is one of the best versions of Santa's workshop I've seen on film.

A similar compliment needs to be extended to the make-up artists: this is one of the best looking Santas I've seen, too. I just wish I had a better idea of the job the actor did. You can only tell so much from body language when they wedge a different actor's voice into his mouth.

In addition to the visuals, the soundtrack was extremely solid, as well. It has a distinct Christmas flavor without over relying on tired melodies.

All in all, this was a decent, if frustrating, movie with some great aspects. Even if I'd seen it subtitled, it wouldn't forgive the cowardly direction the ending went in or the movie's other dumb choices. Still, there are surprisingly few decent live-action interpretations of Santa Claus, and the character, at least, was well realized.

I can't recommend seeking this out unless you're an obsessive Christmas geek or under the age of six. If you're the former, though, there's enough to this portrayal of Santa to be intriguing. If you're the latter... do your parents a favor and watch it without them.
00's Drama Erin Snyder Movie