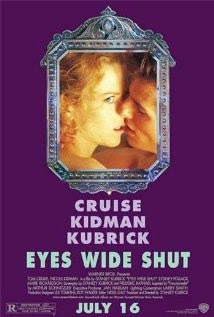 The strange lighting, coupled with the almost alien music and meandering story line of Eyes Wide Shut, created a dreamlike effect. And by "dreamlike effect," I literally mean the movie almost put me to sleep, because it was astonishingly, bafflingly, almost unbelievably boring. This was one of the most boring movies I've seen since... well... actually, it hasn't been that long since I've seen something this boring, but keep in mind I watch a hell of a lot of bad Christmas flicks. But the competition generally goes more than ten minutes without showing naked people: Eyes Wide Shut has no excuse for failing to hold anyone's attention.

I heard a while ago that this was a Christmas movie, which I wasn't aware of. Turns out, the movie is Christmas through and through. Christmas lights, in particular, are in damn near every scene that doesn't contain weird sex cults. Half of the film's lighting seems to come from multicolored bulbs. The other half is pale blue light. Sometimes characters appear with half their face illuminated in pale blue and half in Christmas lights. It is, to be fair, very pretty. At least the first fifteen times the effect is used.

On top of the lights, there are gratuitous shots of Christmas trees all over the place. Everyone has a Christmas tree everywhere, and the camera makes a point of scrolling by them one by one. I want to point out that this was set in New York City. It's really hard to fit a Christmas tree in a New York apartment: believe me, I lived there for seven years. Okay, I'll believe the rich doctor has one, but the poor hookers living in a five hundred square foot apartment? No way in hell.

Hey! You like poinsettias? Well apparently so did Stanley Kubric, because they're all over the place. And that's just for starters. This movie is filled with enough red and green imagery to make an AP English teacher wish a cut existed that they could show their students. Look! Symbolism!

And what does all that symbolism mean? Why is a movie about marital infidelity (or debatably fidelity) set at the holidays in the first place?

Who the hell knows?

Okay, I've got theories. Some of them are even what I'd call good theories. Complex theories that tie into the movie's apparent themes. I actually considered writing about a few of them here. But then I realized something: even if any of those theories are right, they don't actually make the movie less boring. And there's a good chance they're wrong, anyway - apparently there are dozens of theories on why Kubric set this thing at Christmas.

If I had to boil it down to the absolute maximum amount of my life I was willing to spend on the subject, I'd summarize it like this: the movie's main character, who is named after Harrison Ford and played by Tom Cruise because the versions Kubric planned with Woody Allen and Steve Martin never got made (thanks, Wikipedia!), got in a fight with his wife NOT over some stuff that happened in a prior scene that would have made sense for them to fight over, but rather over some other stuff that happened off-camera before the movie that made no sense for them to even be talking about. Bill Harford (no, really - Harrison Ford - the Wikipedia article for this thing is hilarious) runs off into the night. He's overcome with feelings of... er... well, I guess I'd have to say indifference. This is Tom Cruise we're talking about: in 1999, his acting range basically stretched from being undecided as to what he wanted on his pizza to having made up his mind to order a pizza (in the intervening years since this came out, he's greatly improved as an actor: I dare say he could now convince me he'd decided on a calzone). So, with an essentially emotionless, nondescript face, he embarks on an Odyssey of almost-sexual encounters. The most significant of which involves him infiltrating the aforementioned secret sex cult, where he's caught and possibly almost killed. The cult then follows him and possibly kills a few people who helped him.

Oh, and all of that is probably a dream. Or not: it's really ambiguous. How post-modern.

That's the movie in a nutshell. Also, there are lots of naked people, and lots of Christmas trees, but never at the same time. That was probably intentional, but who cares.

This was finished right before Stanley Kubric died. I assume that's at least partially the reason this scores 77% Fresh on Rotten Tomatoes. Well it's been fifteen years, so I think it's time we admitted this was not one of his better movies. Kubric was a visionary director in his time, but that time was clearly over a long time before he cast Tom Cruise as a medical doctor undergoing a trying emotional journey.

While I can't in good conscience recommend anyone sit through Eyes Wide Shut, I do want to plug the Wikipedia page again. Did you know this movie holds the record for most time wasted in continuous production? It's a fact!
90's Drama Erin Snyder Fantasy Movie Mystery Sucks