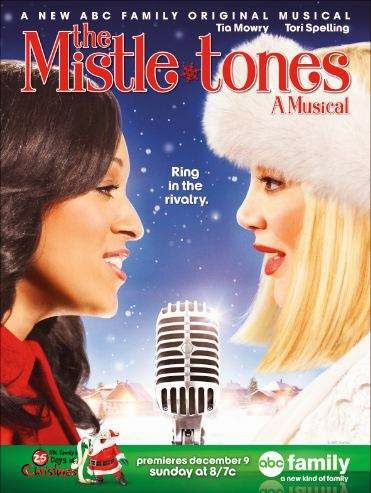 I don’t know what the message of this movie was supposed to be. I mean, I know it must have had one, it’s the type of movie that has a feel-good message to tie everything up in a bow at the end. It’s an ABC Family Original.

But I watched the movie, and I’m not sure what the message was.

It should have been that Christmas is about being with people who care about you, or that singing is about enjoying yourself, not beating someone else. Or about seeing what’s important in life. However, it all got a bit muddy in between montages.

Because, while I kind of enjoyed this movie, in a so-cheesy-it’s-almost-good kind of way, it was quite a bit lacking in actual plot or character.

Holly wants to join the singing group, the Snow Belles. She wants to do this because her mother founded the group. Even though the woman currently running the Snow Bells (Marci) is a horrible person and has obvious delusions of grandeur, and the most important thing this group of women does is sing at the mall, Holly seems to think joining the Snow Belles would still be the best thing ever!!1!

Holly is not the brightest bulb on the Christmas tree.

Because Marci’s mean, and Holly’s talented, Holly is shut out of the Snow Belles, leading to a lot of whiny soul-searching and eventually founding her own singing group with the people at her office who already had speaking roles in the movie. Except her boss, which means he’s the love interest.

And he’s kinda cute, and of course it turns out he can sing, and in the world of ABC Family, apparently you can date your boss with no negative consequences. Holly goes back and forth a million times over whether she thinks they can win at a public audition being held for the mall concert. The MALL concert. This is not even high-school-size life or death. She needs to calm down.

This movie was clearly green-lit on the success of Glee and its cousins, which gives us plenty of vaguely auto-tuned musical numbers. They aren’t terrible, and some are actually kind of good, or at least fun.

The whole movie is sort of lighter-than-cotton-candy fun if you don’t think too hard about it. If you do think about it, it’s fun to yell at.

In the end, the Mistle-Tones don’t beat the Snow Belles, but everyone has a good time and makes friends, except Marci, whose friends threaten to dump her if she doesn’t stop being a meany-head. And Holly and her boss sing at each other and then make out. And everyone cheers, and it snows.

Because it always snows at Christmas just in time for the message, in ABC Family Land.
2012 Comedy Lindsay Movie Musical