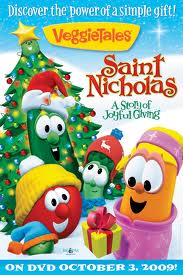 Ah, VeggieTales. At last we meet face to face.

VeggieTales is about a bunch of anthropomorphic vegetables who praise Jesus and tell really, really awful jokes. The vegetables don't have hands, but still manage to lift small objects in front of them, as if they did. I can only assume this is done with a limited form of telekinesis.

As premises go, I think I'd rank this dead last out of absolutely everything humanity has ever invented. And yet... somehow... this was so bad it failed to live up to its potential.

I'm going to gloss over the frame story about a broken truck and jump right into the real meat of this thing, which concerns the "real" Santa Claus. Of course, they're referring to Saint Nicholas, bishop of Myra. Ultimately, I'd describe the final result as being less historically accurate than Santa Claus is Coming to Town.

Sure, they turned Nicholas into a pepper, but that was far from the only alteration. The story started out acceptably (not counting the pepper thing, of course), with a loosely retold version of his family life and his parents' eventual death. For the record, I'm giving them a pass on several invented elements here, including Nicholas's parents' booming fishing business and their nemesis, a cruel competing fisherman angry at how many fish they gave away for free.

After Nicholas's parents die, Nicholas decides to travel the world in search of happiness. For those of you unfamiliar with the story, this isn't how it goes.

At any rate, he winds up learning to embrace God's love or something at a Christmas celebration, which almost certainly wouldn't have been going on (there's no evidence Christmas was celebrated prior to Christianity becoming the state religion of Rome and effectively taking over existing pagan celebrations... and that was later). So Nicholas decides to head back and give to the poor.

He returns to discover his parents' competitor is now mayor and has outlawed gift-giving. At this point, I wanted to cry. I'm going to give this the benefit of the doubt and assume this was intended as a sanitized version of the persecution and not a rip-off of Burgermeister Meisterburger's laws against toys, but it really feels more like the latter. Nicholas decides he'll have to deliver gifts in disguise, so he sets out to do just that.

His opportunity comes when he learns the father of three sisters can't afford their dowries, and is therefore planning to sell them into prostitution. I kid, of course: in this version, they're being fined a gold coin each for breaking the law against gift-giving. Unless they come up with the money, they'll be thrown in jail.

So Nicholas heads out with his butler dressed as Robin, and... you know what? I can't bring myself to go on. There's a shitload of dumb antics and a sleigh and... you get the point. Also, there's a song and dance number about giving donuts to a dog. And Amy Grant sings. Not about the dog: something else.

Yeah. This thing was boring and - surprise, surprise - excruciatingly painful to sit through. Not recommend for anyone, particularly the young, who need to learn to eat their damn vegetables, not go to them for spiritual guidance.
CG Comedy Episode Erin Snyder Religious Sucks